Shaurya Durgeshwar: I will never give up on a hard time 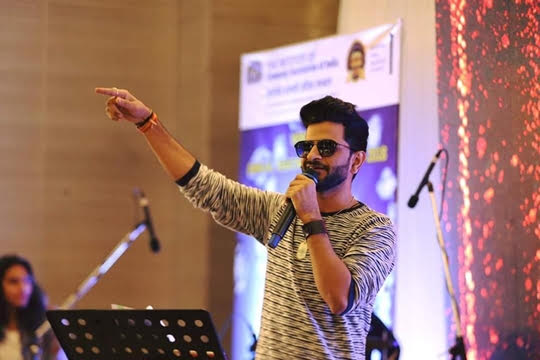 Rockstar Shaurya is a prominent name in the music industry whose passion for live performing and music exudes with each of his tracks.

Among the many industries that have been on a constant rise, the world of music and entertainment are those that constantly evolved even amidst trying times. For this, passionate individuals, especially youngsters, need to be thanked for bringing newer ideas and visions to the table in their respective niches and working constantly for taking their industries to exponential levels of success. The music industry has so far seen many such talented beings, be it as singers, producers, composers, lyricists, artists, etc., but a few of them make sure to impact people positively through their work. We came across one such highly talented and driven creative soul named Shaurya Durgeshwar, an ace singer and musical artist everyone is talking about in recent times.

Shaurya Durgeshwar is an Indian playback singer. He is also performing an evergreen melody on the stage. He followed his passion from childhood and became the uncrowned king of music. check-out the latest music video ''Ye to bahana hain" by him in 2021.

Recent news is abuzz that Shaurya Durgeshwar is all prepped about his newest single titled "Dil Naiyo Manda", a new Punjabi track that will yet again take the music scene by storm just like his previous tracks like "Mujhko Pyaar Aaya", "Teri Aadat" and "Hum Hain Fauji" The young singing talent who hails from Sanediya, Rajasthan, has risen to fame as an Indian pop singer, composer and lyricist and is known across social media as Rockstar Shaurya.

After a break of covid-19, his new song, ‘Ye to bahana hain,’ is all set to release, which comes along with a Bollywood touch. It Is a heart breaking song, which will surely be all set to become the part song of 2021.

Essential Information to know about the song:

Singer of the song: Shaurya Durgeshwar

Talking about his newest track, Shaurya Durgeshwar says that he can't keep calm nor can he contain his excitement enough as this time as well, he has worked around the song, keeping in mind the uniqueness factor, which he believes has been at the core of his success so far in the industry. Shaurya Durgeshwar today has emerged as a fine talent in music and has also inspired many other aspiring musical artists across the country who wish to take multiple steps forward to make their career as musicians and artists.

All his songs exude his passion for music and his potential to take over the industry in ways more than one. To know more, follow him on the different social media platforms.