The exponential growth of The Summer News 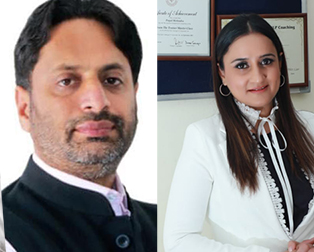 Led by young, dynamic media professionals with the acumen of entrepreneurial skills, “The Summer News’ is rising phenomenally under the aegis of Arshdeep Samar and Payal Mohindra. The organization in no time has become the agenda-setting news organization in Punjab. The news channel, which has risen exponentially in just nine months, is committed to delivering the news as it happens. Moreover, the news organization with strong ethics makes relentless efforts to show true stories without any bias.

Directors of The Summer News, Arshdeep Samar and Payal Mohindra, leading the media organization from the front, need no introduction. Both, with their vast experience in journalism, are taking the news organization to greater heights. The channel focuses on publishing multimedia and news articles based on authentic field reporting over varied issues. Arshdeep Samar, a seasoned journalist in Punjab, came up with emanating news with a purpose and floated the organization in August 2020. Payal Mohindra, an electronic media professional with experience and effective management, joined the organization in April (2021). She has helped the news channel garner an impressive following across multimedia, including Facebook, YouTube, Instagram, and Twitter.

The news channel has attracted a huge number of viewers on its news website, Facebook, YouTube, Instagram, and Twitter. The channel started with just ten lakh followers and rapidly attained an impressive daily reach of 6.1million people. Resultantly, it has found a place amongst the top 3 channels in the region of Punjab, Haryana, and Himachal. Samar says, “Digital platform is the future of journalism. I noticed that there was a need for a credible platform in journalism that was professional and authentic. We built our positive image among people in a short period with our trustworthy work in media. “

A force to be reckoned with: Arshdeep Samar and Payal Mohindra

Arshdeep Samar hailing from the business capital of Punjab, Ludhiana brings with him experience from print and electronic. As a budding journalist two decades ago, at the age of 22, Samar always thought of taking journalism to greater heights. Samar, a firm believer in ground reporting, used to do extensive leg work as a crime reporter with Amar Ujala in 2002. As a senior reporter with Dainik Jagran, Samar handled beats like crime and politics during his 11-year stint with the newspaper. Samar was widely acclaimed for his impactful investigative journalism and accurate political analysis. After completing his gig with print, Samar ventured into electronic media. He was associated with the leading news channel NDTV in 2007. With a vast journalistic experience and deep knowledge about the issues in Punjab, he is now striving for further success as the director of The Summer News. His zeal to uncover the truth and factually address critical matters makes him a role model for budding journalists. He was conferred with State Award by Punjab Government for his contribution to media and social work. In addition, he was honored by Indo-Tibetan Border Police (ITBP) for his contribution to the media.

Payal Mohindra, an electronic media professional with experience of over one decade, has donned many hats. She was a news presenter, TV Anchor, Radio Jockey, corporate Emcee, and content writer. Payal is also an internationally certified Trainer, NLP Master Practitioner, and life coach. Even though Payal has worked in different fields, she found her true calling in journalism with The Sumer News. Her comprehensive experience has helped the organization grow in leaps and bounds in the digital arena. With her 15 years of experience, Payal is the driving force behind the extensive growth of the venture.

Under the able guidance of its two directors, the channel has proliferated in trustworthiness, coverage, and audience base. As per the latest figures, the channel found 2.65 crore views in just the last 28 days! Moreover, it has attained 10,000 followers on YouTube, 5000 followers on Instagram, and a whopping 9 lakh followers on Facebook!

Values that drive the organisation

•Uphold the true spirit of journalism.

•Strive to uncover the truth.

•Innovative solutions to increase the channels following, primarily involving the use of Social media and YouTube.