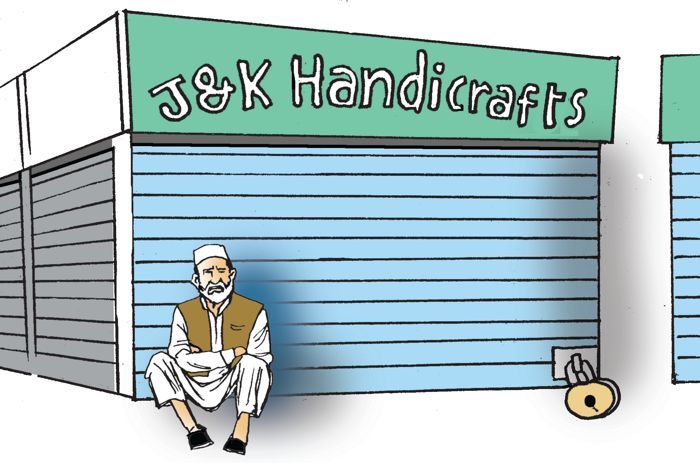 Life in the Kashmir Valley is still grappling to come to normal in the aftermath of New Delhi’s decision on August 5, 2019 to scrap Article 370 that granted special status to the erstwhile Jammu and Kashmir state. All areas of life were affected and businesses were among the worst hit.

The Kashmir Chamber of Commerce and Industry (KCC&I) has released a report on losses suffered by the businesses. The report said Kashmir’s economy had suffered losses to the tune of around Rs 17,878 crore in the first 120 days after August 5. It also said around 4.96 lakh jobs were lost during this period.

KCC&I president Sheikh Ashiq said compiling the report was an arduous task and a comprehensive report would be drafted once internet service was restored.

“We formed a team that focused on 10 districts of Kashmir. We assessed the losses by personally taking inputs from stakeholders of various sectors such as tourism, horticulture, agriculture, health, education, among others. Businesses dependent on internet are still incurring huge losses,” Ashiq told The Tribune.

He said few sectors have suffered irreparable losses and need to wait for the next season to make up for that. “We export handicrafts of Rs 2,000 crore annually and receive maximum orders from July to September for Christmas sale abroad. This year, exporters lost contact with businessmen abroad as nowadays orders are received on WhatsApp. Now, we have to wait for coming July,” said Ashiq.

The government’s advisory on August 2 had asked tourists and Amarnath yatris to curtail their visit to the Valley. Though the advisory was lifted on October 10 last year, the footfall continued to remain low. As per the J&K Hoteliers Club, the occupancy in hotels was less than 10%. Ashiq said the losses came at a time when the Kashmir’s economy was still recovering from the devastation of 2014 floods and other factors such as demonetisation and imposition of GST.

“The losses came at a time when we were still struggling to revive from the aftermath of 2014 floods and the 2016 unrest, demonetisation and GST,” he said.

And as marketplaces have opened in most parts of the Valley now, traders said they were still suffering.

“Nowadays businesses are dependent on internet and we have been deprived of this facility for over five months now. Our shops remained shut most of the times since August 5 and when we are trying to make up for losses now, atmosphere is not so conducive. Filing GST returns in the absence of internet was a headache. Many traders travelled to Delhi to file returns while others had to sit in queues at government offices where internet facility was provided,” said Kashmir Economic Alliance vice-chairman Aijaz Shahdhar.