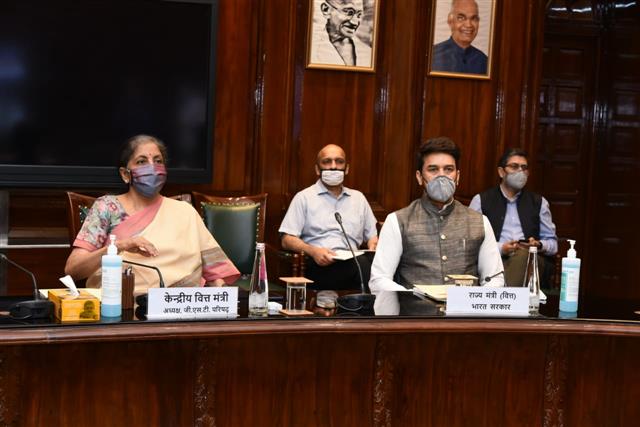 A crucial meeting of the GST Council on compensating states for revenue shortfall began on Thursday. Image: Twitter/@FinMinIndia

"States have sought a week to deliberate on two options offered by the Centre to make up for the shortfall in GST collections", said Union Finance Minister Nirmala Sitharaman after the conclusion of the 41stt meeting of the GST Council here on Thursday.

Once the states decide, the Centre would approach the Reserve Bank of India, that would raise the money to make up for the shortfall in GST collections. The Centre may compensate the states by extending the period for a refund of cess beyond the five-year-period that ends in 2022.

The Centre would convene another meeting of the GST Council once the states have decided their options, and the RBI agrees to the Centre’s proposal.

As a result of a tanking economy due to the "hand of God’’ which may lead to a contraction, the compensation gap this year is expected to be Rs 2.35 lakh crores.

The shortfall in compensation due to the pandemic has been estimated to be Rs 97,000 crores under the first option and states going for this window, can borrow 0.5 per cent of their state GDP without going through the conditionalities, that the Centre had earlier prescribed.

"Under the second option, the entire gap of this year could be met by the borrowing of states, and arrangements could be made with RBI", said Sitharaman, but with a condition that the states will have to carry out reforms in power tariff, etc, to borrow.

Lashing out at the webinar of seven state CMs convened by Congress President Sonia Gandhi, Sitharaman, however, complimented the participants at the GST Council for displaying statesmanship by focusing on the issue at hand.

"Sonia Ji, had said non-payment of compensation is a betrayal of nation and states. At the GST council meeting today, states did not indulge in politics. Ministers and CMs behaved like statesmen while those outside who blocked compensation when the law was being drafted are now indulging in politics,’’ she said.

Finance Secretary Ajay Bhushan Pandey said the Ministry had sought the Attorney General’s views, who had opined that GST compensation, has to be paid for five years, and the compensation gap to be met from cess fund and not from the Consolidated Fund of India.

“On expected lines, the deliberations on compensation were long and inconclusive. These are challenging times, and both Centre and States would once again need to evince cooperative federalism, to find a workable solution, which takes care of interests of both parties", said Harpreet Singh, Partner, KPMG.