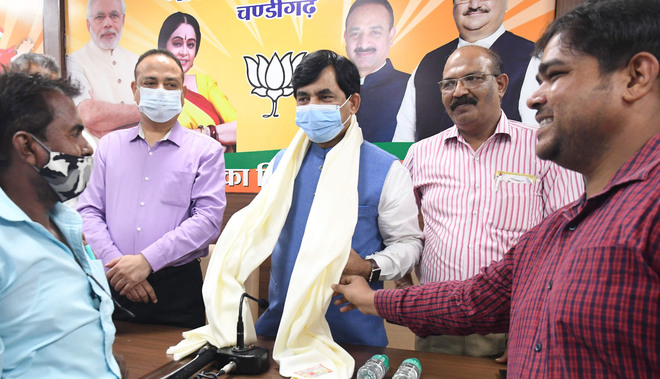 National BJP spokesperson Syed Shahnawaz Hussain today claimed that the BJP will win the Chandigarh Municipal Corporation elections and come up with “surprising result” in the Punjab elections.

Hussain, who was in BJP office for an event, said: “I will visit the city again during the MC elections. We will win the poll.”

On BJP’s prospects in Punjab elections in the light of farmer protests, he said: “We will surprise people and perform well,” he replied.

City party chief Arun Sood added: “Several big names from Punjab have been joining the party. People will gradually realise that the farm laws will uplift the life of farmers and are meant to raise their income.”

Hussain criticised the recent attack on the city Mayor and ex-chief Sanjay Tandon during a farmers protest in Sector 48 here. “This is not right. Everybody has a right to protest, but violence is condemnable. Modiji’s aim is to increase the farmers’ income.”

Hussain, who is also the Minister of Industries in the Bihar Government, criticised the opposition for not letting the monsoon session operate. He earlier held a meeting with BJP’s minority cell members at Kamalam.