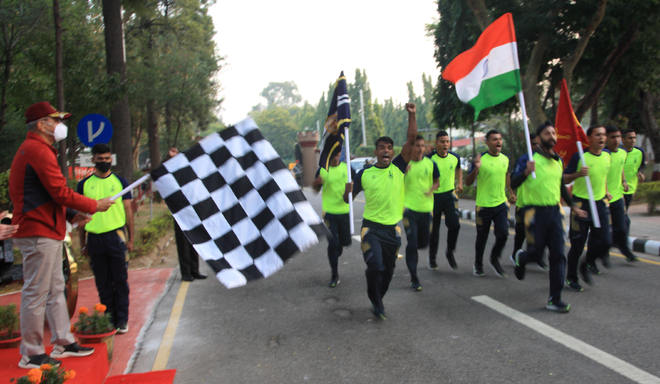 A 260-km ultra-marathon being flagged off from Chandimandir on Friday.

To commemorate the 260th anniversary of the Army Service Corps (ASC), a 260-km ultra-marathon was flagged off by the General Officer Commanding-in-Chief, Western Command, Lt Gen RP Singh, from Chandimandir today.

On this occasion, a wreath was also laid at the Veer Smriti War Memorial by Maj Gen Harsh Chhibber, head of the ASC branch at the Headquarters Western Command on behalf of the ASC team to pay homage to martyrs.

The marathon team comprising of one officer and nine soldiers is led by Lt Col Inderjit Singh, a renowned ultra-marathon runner and founder of the ASC Ultra Marathon Team.