4 years on, 13 Chandigarh villages on bumpy road to progress

Works to provide amenities tardy despite merger with MC 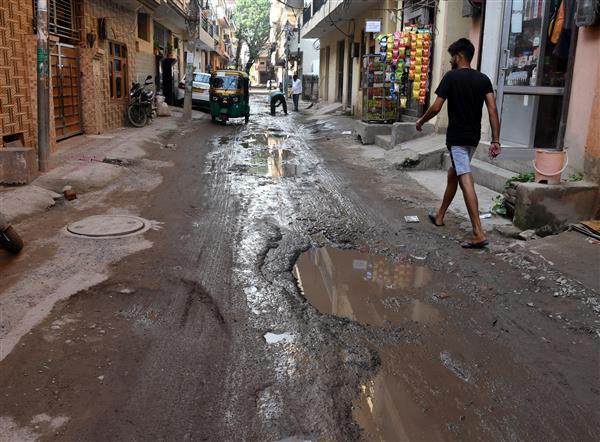 Even four years after 13 UT villages merged with the Municipal Corporation, basic amenities continue to elude these.

With work on recarpeting of roads yet to take off, most of these are either badly broken or unmetalled, giving a bumpy ride to commuters. On the other hand, the work on laying of storm water drainage, sewerage and water pipelines is going on at a snail’s pace, leaving most of the roads unusable.

Part of the road is dug up every now and then, but never repaired, leaving big potholes. A deadline must be set. —Manoj Lubana, Kishangarh resident

Work on laying of sewerage, drainage and water pipelines is about to finish. Recarpeting will follow. —Anindita Mitra, MC Commissioner

Kishangarh residents have been going through the ordeal for a long time. “Let alone drive a car or ride a bike, even walking is a challenge on the village road. Part of the road is dug up every now and then, but never repaired, leaving big potholes. People are tired of this. A deadline must be set. Don’t those living in villages have the right to a better life?” says Kishangarh resident Manoj Lubana, who is also the president of the city Youth Congress. Similar is the case with Khuda Lahora, where residents rue tardy pace of work.

Gurminder Singh, an activist, rues: “Work on laying of a pipeline in our village got delayed as the tendering process was cancelled recently. It earlier got delayed as the MC had no idea about the land under it after the merger. Today, roads in Punjab villages are far better than those falling in Chandigarh. These have not been recarpeted for 15-20 years. It is being delayed further now owing to the ongoing work.”

Three-time Daria sarpanch and former president of the Pendu Sangharsh Committee Gurpreet Singh Happy feels accountability must be fixed for delays. “The MC has not included areas outside the ‘lal dora’. Roads there have been dug up for the past six months. During monsoon, water gets accumulated and people have to bear with foul smell. It is also a breeding ground for mosquitoes. Besides, it seems no accountability has been fixed on contractors, who are working at will,” he says.

“The villages were better off under panchayats. There has been no development. Instead we are made to pay 30% sewerage cess and commercial property tax while we get no additional facilities,” he adds.

On their part, MC officials blame it on lack of funds when the villages were notified for merger with the civic body in November 2018. Only in March last year, Rs 50 crore was released for village development by the UT Administration. The work on laying of pipeline was started thereafter.

“Also, the UT Administration kept the MC waiting for a year, saying it would carry out the road works, before passing the buck to the corporation,” says an official.

The administration released Rs 15.85 crore for repair/upgrade of roads in June this year. Anindita Mitra, MC Commissioner, says: “Some of the work on laying of sewerage, storm water drainage and water pipelines is over, while the rest is about to finish. All these works are through the tendering process. As for roads, until the aforesaid works are completed, recarpeting cannot start. There is no point digging up roads again once these are relayed.”

The MC is yet to start the process of tendering for roads. The road works in the villages are expected to start around October.

Laying of drainage, sewerage and water pipelines is underway

Recarpeting of roads will begin once previous works are completed