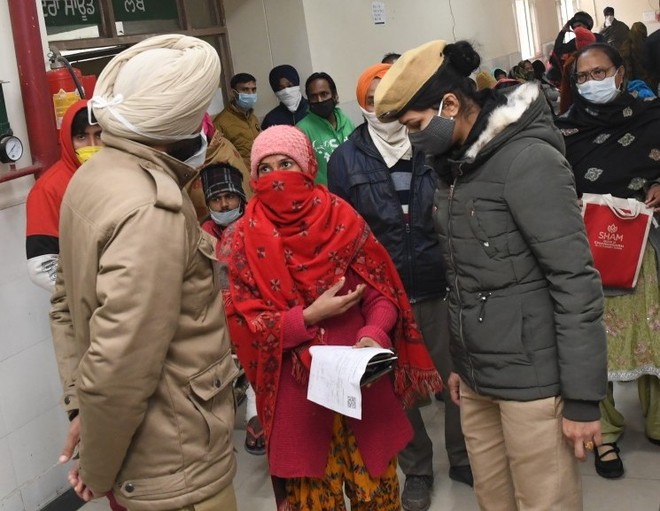 A patient talks to security personnel at the emergency ward in Mohali.

As many as 40 healthcare workers (HCWs) were given Covid vaccine at the Civil Hospital in Phase 6, Mohali, and Community Health Centre in Banur on the first day of the vaccination programme launched across the country.

There was some apprehension over side effects of the vaccine among health workers at the initial stage. The healthcare workers who were administered the vaccine on Saturday included doctors, nurses and office staff of the government hospitals in the district. As many as 32 health workers were vaccinated at the Civil Hospital while eight were given shots at the Community Health Centre.

Civil Surgeon Dr Adarsh Pal Kaur said there was some apprehension over side effects of the vaccine among health workers at the initial stage. The healthcare workers who were administered the vaccine today included doctors, nurses and office staff of the government hospitals in the district. She said 32 health workers were vaccinated at the Civil Hospital, while eight were given jabs at the Community Health Centre.

Dr Adarsh Pal Kaur said the vaccine would now be administered on Monday. There were 11,284 healthcare workers in the district. Senior citizens, Army, defence and police personnel would be administered vaccine in the second phase of the programme. After that, common citizens would be involved in the vaccination programme.

The health authorities have set up eight Covid-19 vaccination centres in the district, including Kharar, Dera Bassi and Mohali. Three centres each have been set up in Dera Bassi and Kharar areas, while two centres have been set up in Mohali and Banur. Six persons will be vaccinated per hour as it takes 10 minutes to vaccinate a person. Each beneficiary has to be kept under observation for half an hour to monitor adverse event following immunisation (AEFI), if any.

These vaccine administration sites or session sites have three well-ventilated dedicated rooms/areas - waiting room for beneficiary line-up, vaccination room where vaccine will be given and the observation room for monitoring of adverse event following immunisation.

Patients visiting the emergency ward at the Civil Hospital were a harried lot as tight security arrangements were made at the hospital in view of Punjab Chief Minister Capt Amarinder Singh’s visit. Police personnel allowed patients in small groups for treatment. Sooraj, who was operated upon recently, came to the hospital for dressing. The patient said he had to wait for almost two hours before being allowed to enter the emergency ward.