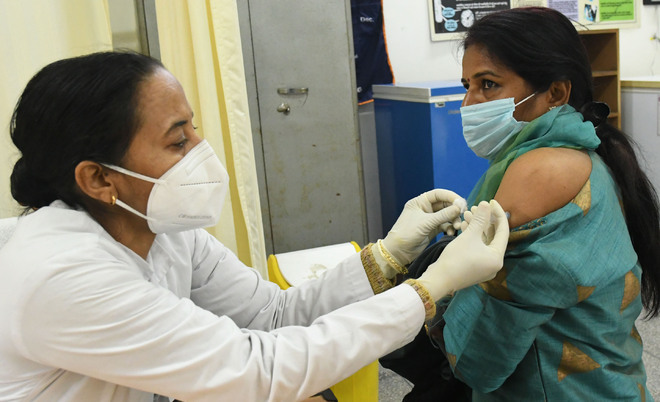 A health worker being vaccinated against Covid-19 at the Urban Health Centre in Sector 16, Panchkula.

Around 52 per cent of the targeted healthcare workers came forward for vaccination against Covid-19 in a week since the drive began in the city.

Against a target of 3,046 beneficiaries, 1,611 have been inoculated so far. The Government Multi-Specialty Hospital, Sector 16, has witnessed the highest turnout of 89 per cent.

Dr Amandeep Kaur Kang, Director, Health Services, UT, said since the on-the-spot registration began, private medical practitioners had started coming forward at the hospital for vaccination. Besides, regular counselling was being done to allay fears regarding the vaccine among the healthcare workers.

Dr SS Pandav, who is looking after the immunisation programme at the PGI, said people had started coming forward for inoculation now. “The turnout today was comparatively low due to Saturday. We did not make much effort and only volunteers came. However, there has been a change in the attitude of people regarding the vaccine. The healthcare workers are asking and seeking guidance on the subject.”

Dr Pandav said the institute was going to open another centre on Monday. The PGI today increased the upper limit of beneficiaries to be vaccinated to 200 per site. The overall turnout at the institute has been 51 per cent.

“Initially, the government was quite concerned and therefore, it capped the upper limit to 100 persons per site. Looking at the safety profile of the vaccine, we have been allowed to increase the

upper limit to 200 beneficiaries per site. More than a million people have been vaccinated with negligible side effects. It is evident that the vaccine is reasonably safe,” said Dr Pandav.

The lowest turnout was seen at the Government Medical College and Hospital, Sector 32, at 34 per cent. “We are trying to educate people on the Covid-19 vaccine and taking up their queries. There is still some amount of vaccine hesitancy among people and we are trying to address it. Healthcare workers who were hesitant in the beginning have started coming forward after the counselling,” said Dr Deepak Chawla, Covid-19 vaccination in-charge at the GMCH-32.

On Saturday, a total of 345 healthcare workers were inoculated against a target of 1,000. The new sites that opened today did not get a good response as only eight beneficiaries turned up at the second site in the GMSH-16 and 29 persons showed up at Civil Hospital, Mani Majra.