79.4% adults in Chandigarh have antibodies to Covid-19 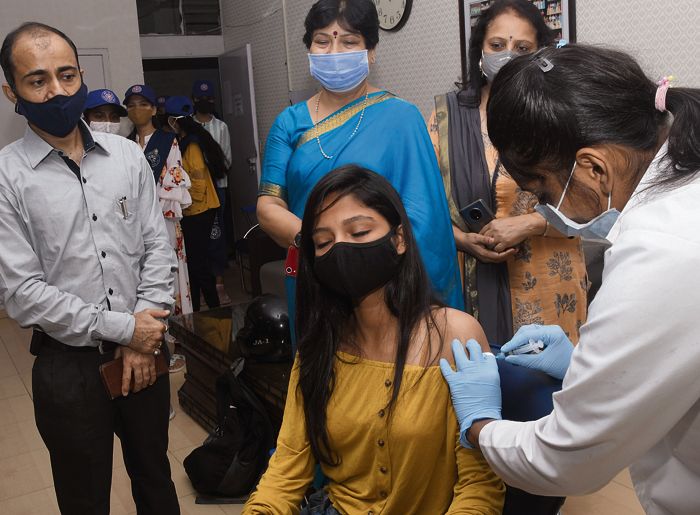 A health worker administers the Covid jab during a camp at a college in Sector 42, Chandigarh, on Tuesday. photo: VICKY

Around 79.4 per cent of the adult population above 18 years in Chandigarh has antibodies to coronavirus, the Government Medical College and Hospital (GMCH), Sector 32, stated today as it announced the preliminary results of a sero survey.

The study involves collection of 1,200 samples from 30 randomly selected clusters in the UT, including population-based representation of urban, rural and rehabilitation colonies.

Of the 132 participants from rural areas tested so far, 91 (68.8 per cent) came out positive for the presence of IgG antibodies to SARS-CoV-2.

Similarly, in eight clusters from urban sectors and five in colonies tested so far, the seroprevalence has been found to be 83.5 per cent and 79.8 per cent, respectively. The seropositivity indicates the presence of IgG antibodies to SARS-CoV-2, developed naturally following the Covid infection or after vaccination.

Dr Jasbinder Kaur, Director, GMCH-32, said, “The complete results of the study will provide a more accurate reflection of the true extent of SARS-CoV-2 seroprevalence amongst the adult population of Chandigarh. It will help understand the prevalence of the disease as well as the immune response to the Covid vaccine.”

Dr Kaur added, “Serological testing for SARS-CoV-2 in the general population can be utilised for epidemiological purposes in identifying the prevalence and transmission dynamics of the disease. It will indicate the extent of the spread of infection in the population which forms the basis for strengthening public health mitigation measures. The results of the study will enable the health authorities to work out public health strategies which in future may help in the prevention and control of the disease. It will also help in prioritising the at-risk population.”

The sero survey is being conducted by the departments of biochemistry, pulmonary medicine and community medicine at the GMCH.

The electoral population of Chandigarh in different wards comprising of sectors, villages and resettlement colonies has been used to draw a representative sample of 30 clusters. Four locations were randomly identified in each cluster and from each location, randomly selected 10 consecutive houses were chosen for sampling.

The sero survey for cases in 6-18 years age group conducted by the PGI also indicated that 67.4 per cent children in sector areas, 74.3 per cent in rural and 73.2 per cent in colony areas have antibodies.

Chandigarh: The city on Tuesday reported four new cases of Covid-19 and no death due to the virus. A total of 18 patients were cured of the disease in the past 24 hours. — TNS

5 more infected in Mohali, no death

Mohali: Five more persons were found infected in the district during the past 24 hours. No death was reported, while eight patients recovered from the virus. Among the new cases, one was reported from Kharar, while two cases each surfaced in Mohali (urban) and Gharuan. — TNS

Panchkula logs one case, no death