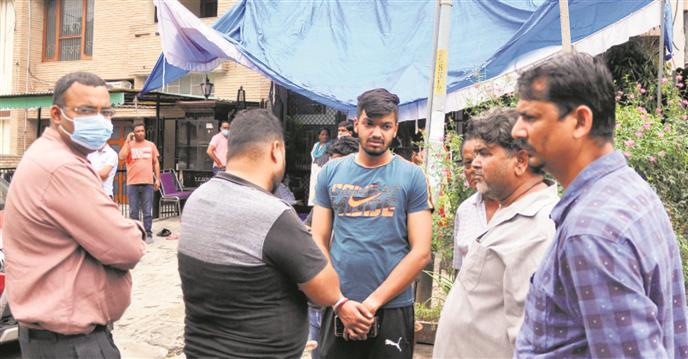 A pall of gloom descended on the families of the three youngsters after the news of their death in a road accident in Rajpura broke out early this morning.

All three accident victims were students of Chitkara University and were returning after paying obeisance at the Kali Devi temple, Patiala, the police said, quoting the FIR.

While Aakarshit Goyal and Yash Mittal hailed from Sector 9, Ishan Kalra was a resident of Sector 20.

Hunarpal from Sector 46, Chandigarh, who was also sitting in the rear seat of the car when it collided with a truck near Alampur village, Rajpura, is said to be battling for his life at the Government Medical College and Hospital (GMCH) in Sector 32, Chandigarh.

Aakarshit was only son in the family

The only son in his family, Aakarshit lost his father, Tirlok Chand, in 2006 and had been living with the family of his uncle, who was a source of emotional and financial support. The car belonged to him. Aakarshit, who was pursuing BTech (Computer), wanted to join his family business later on. He is survived by his mother, Seema, and two sisters.

Yash Mittal (21), a student of B Pharma, aspired to join his father’s pharma company after the completion of higher studies. He is survived by his father Ashish Mittal, mother Noni and 15-year-old brother Vasu