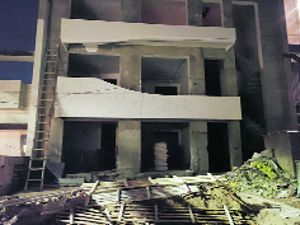 The statement of Rahul Mehta, victim in the property grab case, was recorded before a Magistrate under Section 164, CrPC. Rahul has alleged that he was given intoxicants and tortured by the accused. The police are now considering adding relevant sections to the case.

Mehta, who was admitted to Apna Ghar Ashram, Bharatpur, Rajasthan, was brought to the city by the police to get his statements recorded.

A police official said Rahul had alleged that he was given intoxicants by the accused and also made to sign on blank papers and blank cheques. “We will investigate the statement given by the victim and accordingly, relevant Sections, including 328 (causing hurt by means of poison, etc, with intent to commit an offence) of the IPC will be added to the case,” said a police official.

A total of nine persons have been booked in the case of whom three, including Sanjeev Mahajan, Manish Gupta and Satpal Dagar, have been arrested.

The police said the victim had supported his previous statement given to them. Rahul had told the police that the accused forcibly occupied the upper floor of his house and he was tortured to get the general power of attorney (GPA) of the house executed in favour of Arvind Singla and Khalendra Singh Kadiyan.