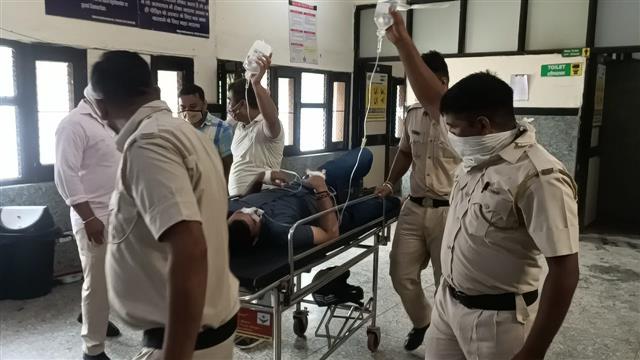 The jawan was reportedly sent to the Police Lines after he stopped the car of a “woman officer” at Majri Chowk for jumping the red light on July 17.

A Home Guards jawan allegedly attempted suicide by taking poison after accusing an official from the Home Guards, Deputy Commissioner of Police (DCP) Mohit Handa and the SHO of the Sector 5 police station, Inspector Lalit, of mental harassment today.

The jawan, Piyush (26), took rat poison and celphos tablets around 10 am on the top floor of the Mini-Secretariat in Sector 1.

He was taken to the Civil Hospital in Sector 6 following the incident. He is now out of danger.

The jawan was reportedly sent to the Police Lines after he stopped the car of a “woman officer” at Majri Chowk for jumping the red light on July 17 while being on traffic duty. The jawan had also shot a video of the incident, narrating his side of the story.

He alleged that the woman had threatened to “teach him a lesson” and even tried to snatch his phone.

In the video, both can be seen engaged in heated arguments.

Moments before taking the poison, the jawan recorded a video message in which he accused the DCP and senior officials of the Police Department of mentally harassing him and transferring him to the Police Lines despite “performing his duty with honesty.’’

He then put out the video in WhatsApp groups.

Assistant Commissioner of Police (ACP), Headquarters, Vijay Kumar Nehra said the July 17 matter had come to their notice following which the jawan was sent to the Police Lines pending an inquiry.

“The woman officer had alleged that the jawan’s behaviour was inappropriate,” he stated.

Speaking to Chandigarh Tribune, the jawan said he was punished for executing his duties objectively.

“Rules are rules. Doesn’t the law apply to a senior officer? The law should be equal for all,” Piyush said.

“I had signalled the driver of the car to stop, but he kept moving. I then asked the driver to park the car on the side, but he threatened me saying, ‘do you know who is sitting inside the car?’ I said it doesn’t matter, traffic rules are applicable to all. The woman sitting on the back seat of the car identified herself as an IAS officer. She threatened to teach me a lesson. While in the car, she called some senior official of the district…..subsequently came out of the car and entered into a heated argument with me. They then left the spot. After 10 minutes, I received a call from the Sector 4 traffic line that my duty had been changed and I should report to the Police Lines,” he told Chandigarh Tribune.

He claimed that he had also appeared before ACP Nehra, who praised him for “executing his duty in an appreciable manner.”

“Yesterday, I received a call from the Sector 5 police station that they have received a complaint against me for misbehaving with a woman officer. I was wondering what wrong did I do by stopping an officer for violating traffic rules,” he said, adding that he was being harassed by senior officials since the July 17 incident. Haryana Home Minister Anil Vij also took cognisance of the incident and instructed DGP Mohammad Aqil to conduct an inquiry into the matter.

The DGP said he had already issued instructions in this regard.

“All facts will be investigated and appropriate action will be taken accordingly,” he said.

The police have already filed an FIR against the woman officer at the Sector 5 police station for violating the traffic rules and obstructing a public servant from discharging his duty.

DCP Mohit Handa could not be reached for a comment.