Air show: Most buses in Chandigarh on shuttle duty, autos have free run : The Tribune India 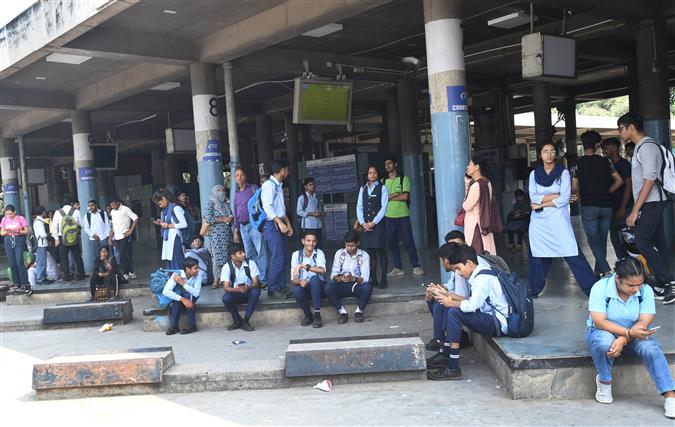 Schoolchildren await buses at the ISBT-17, as majority of the CTU fleet was diverted to ferry air show spectators in Chandigarh. Manoj Mahajan

Commuters were left in the lurch today as they not only struggled to find local buses, but were also fleeced by auto-rickshaw drivers, who charged them almost thrice the fare. Reason: Against over 350 CTU buses plying daily in the tricity, only 40 were put on local routes while the rest were diverted to ferry spectators to Sukhna Lake, the venue of the air show, and back. Worst hit were school/college students as well as office-goers.

While the UT Administration had claimed the bus services were to remain affected from 10.30 am to 8 pm on October 6 and 8, students struggled to find scheduled CTU buses even before 10.30 am at some places.

Mukesh Kumar said: “My children board a CTU bus daily from the stop on the road separating Sectors 31 and 32 at 8.30 am. They failed to find one today and had to go to the bus stop outside the GMCH-32. There, too, they couldn't get a bus. They had a torrid time returning home as well.”

Auto drivers had a field day as they charged almost three times the fare from passengers. Rates of cabs were also marginally increased. “We pay Rs 20 per person on a sharing basis for a ride from Sector 17 to Madhya Marg, but today auto drivers were asking for Rs 60 per head. We are students. It is a rip-off,” said Amita, a schoolgirl waiting at the Sector 17 bus stand.

Many of those who got stuck were angry at the administration. “How can the officials stop an essential service for an air show?” asked Rajesh Kumar, who is in a private job and commutes daily from the city to Zirakpur.

Heavy rush of passengers was seen at the Sector 43 and 17 bus stands as well as bus stops in different parts of the city.

“As an alternative, the authorities should have arranged private buses,” suggested a group of passengers who waited for nearly half an hour at the Sector 17 bus stand.