Haryana minister agrees to some of their demands; 7 union leaders booked 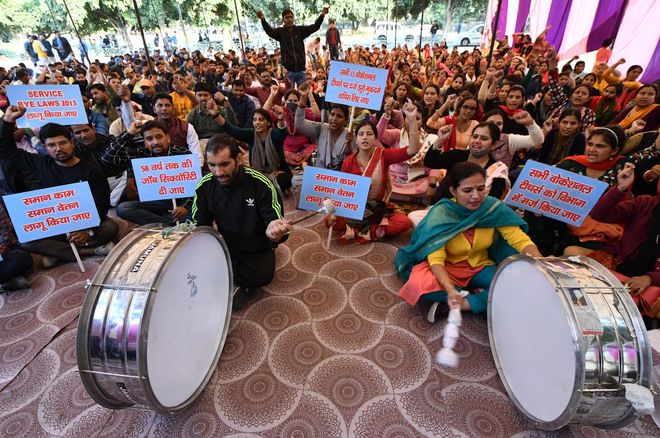 Vocational teachers raise slogans against the government to press for their demands at Sector 5 in Panchkula on Thursday. TRIBUNE PHOTO: RAVI KUMAR

Anganwadi workers have decided to give up their agitation after “fruitful talks” with Minister of State for Women and Child Development Kamlesh Dhanda at the Haryana Secretariat in Chandigarh on their long-pending demands.

Kunj Bhatt, president of Anganwadi Workers and Helpers’ Union, Haryana, said, “Our few demands have been agreed upon and remaining are under consideration. Hence, we will give up our current agitation after final talks tomorrow,” she said.

Yesterday, over 1,000 anganwadi workers had staged a massive protest against the government. The protesters began their march from Sector 5 around noon in an attempt to enter Chandigarh to reach the Chief Minister’s residence. They were stopped midway on the road separating Sector 7 and 8, but eventually succeeded in reaching near the Housing Board light point around 2 pm. They remained there till 10 pm.

The protesters alleged that they were forced to stage the massive protest as their demands fell on deaf ears of the Manohar Lal Khattar-led government.

Meanwhile, the local police have booked seven anganwadi workers’ union leaders for obstructing the traffic on the Panchkula-Chandigarh road for nine hours while staging a protest for their long-pending demands like better salaries, working conditions and facilities like insurance.

A case has been registered against Kunj Bhatt, Raj Bala, Anupama, Usha Rani, Murti, Bimla Rathi and Manpreet under Section 283 (causing danger, obstruction or, injury in any public way or line of navigation) of the IPC at the Sector 14 police station.

The police have booked vocational teachers, who have been camping at the ‘Dharna Sthal’ in Sector 5 since October, for staging a protest outside the Shikhsha Sadan in Sector 5 yesterday and closing its all three gates.

According to the FIR, the protest left the employees stranded and caused traffic jam on the road.

A case was registered against unidentified teachers under Sections 283 (causing danger, obstruction or, injury in any public way or line of navigation) and 342 (wrongful restraint) of the IPC at the Sector 5 police station.