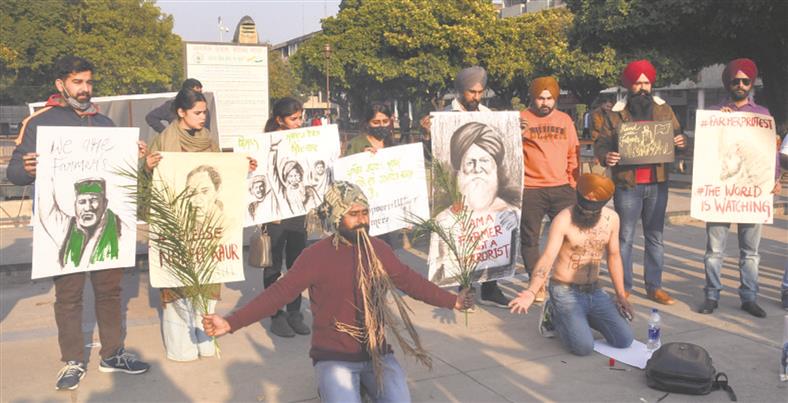 Armed with oil paints, canvas, pastel colours, charcoal blocks and brushes, several artists gathered in the support of farmers near the Rooster Fountain at the Sector 17 Plaza today.

Some of the supporters took to performance art. One Hardev stood blindfolded and barechested, portraying the plight of farmers near the Delhi border, while Vijay held fresh green plants in his hands and stuffed dry, papery ones in his mouth. “This is what farmers look like. They sell their best crop to feed people and consume ‘sookhi roti’ themselves,” said Vijay. Hardev invited people to write on his body.

One of the supporters, Jashandeep Kaur, said: “There’s no mention of Nodeep Kaur in the media, that’s why I made her portrait. She has been arrested by the Haryana police for no apparent reason and has reportedly been sexually assaulted too.” Sania, a postgraduate in fine arts, painted farmers as warriors fighting for their rights and Tarun Kumar painted a portrait of Rakesh Tikait.

Another artist, Sarabjeet Singh, painted a portrait of a farmer with a slogan: ‘I am a farmer, not a terrorist’. He said, “I’m making this portrait to show the real image of a farmer. This is not a fight about Khalisthani and Hindus or Hindus and Muslim; it’s a fight between India’s farmers and its government.”