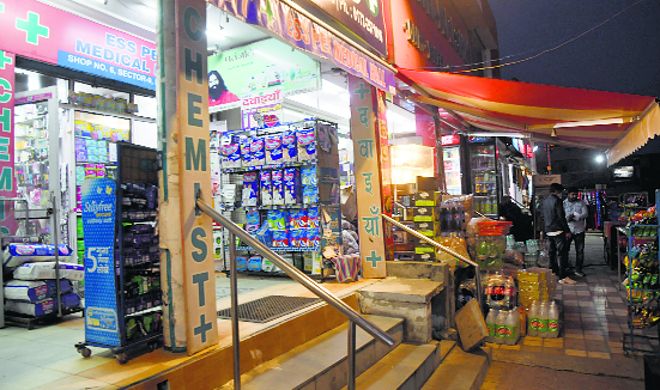 Shopkeepers encroach on corridors at the Sector 9 market in Panchkula on Sunday. Ravi Kumar

Despite clear-cut instructions from Haryana Speaker and local MLA Gian Chand Gupta, encroachments continue to cause nuisance at markets in the city. A large number of shopkeepers and vendors have encroached on roads, corridors, footpaths and park areas.

These encroachments not only persist in commercial hubs or main markets of Sector 8, 9, 10 and 11, but also in the internal markets of sectors.

The Haryana Shahri Vikas Pradhikaran (HSVP) and the Municipal Corporation (MC) have failed to remove theses encroachments from areas under their respective jurisdictions. Even though the authorities have carried out several anti-encroachment drives in the past, they have failed to come up with a concrete solution to the problem.

After anti-encroachment drives, vendors and shopkeepers again encroach on footpaths and open areas.

Several residents’ welfare associations (RWAs) have taken up the matter with the authorities concerned time and again, but to no avail.

Rajinder Kumar, a resident of Sector 7, said: “Shopkeepers should also take it as their responsibility. They should obey rules and regulations and keep their goods within the demarcated area.”