Used to demand money from people; 4 suspects at large 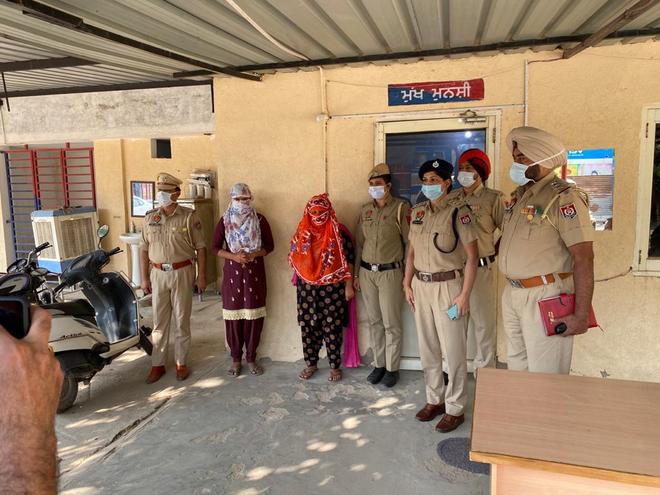 The suspects in police custody in Kharar.

The Kharar police have arrested two women of a six-member gang for allegedly luring people and demanding money by blackmailing them for registering false rape cases against them.

The arrested suspects have been identified as Rajwinder Kaur, a resident of Fazilka, and Usha Rani, a resident of Faridkot. The duo was today produced before a court, which sent them to two-day police custody.

Divulging details, DSP Rupinder Kaur Sohi said two women had been arrested while four other members of the gang, including a woman named Rekha, were still at large. Rajwinder and Usha had duped a large number of tricity residents through a planned scam.

She said the suspects used to join companies as receptionists. After few days, they used to threaten company owners for registering a false rape against them. In this scam, one of the gang members Keshav Sandhir, a resident of Ludhiana, was impersonating as a Punjab Police ASI, who used to demand money from company owners for settling the rape case.

Sohi said Raj Kumar, a Nayagaon resident, recently gave an advertisement on OLX to hire two women staffers at his guest house in Sector 25, Chandigarh, following which the suspects visited his office. The complainant stated that he had hired both women on a monthly salary of Rs 9,000. After few days, they started threatening him for implicating him in a false rape case and demanded Rs 15,000 through their gang members, who claimed themselves as cops.

Raj Kumar lodged a complaint with the police. The cops laid a trap and arrested Rajwinder. Later, Usha Rani was also arrested.

Inspector Bhagwant Singh, SHO of the Kharar city police station, said: “The suspects also lured a physiotherapist in Phase 1, Mohali, by taking over Rs 1 lakh from him in a similar manner recently. The gang was active for the past one year. We will nab the absconding suspects soon.”