Blame game on as flagpole removed from Sector 21 park in Chandigarh : The Tribune India 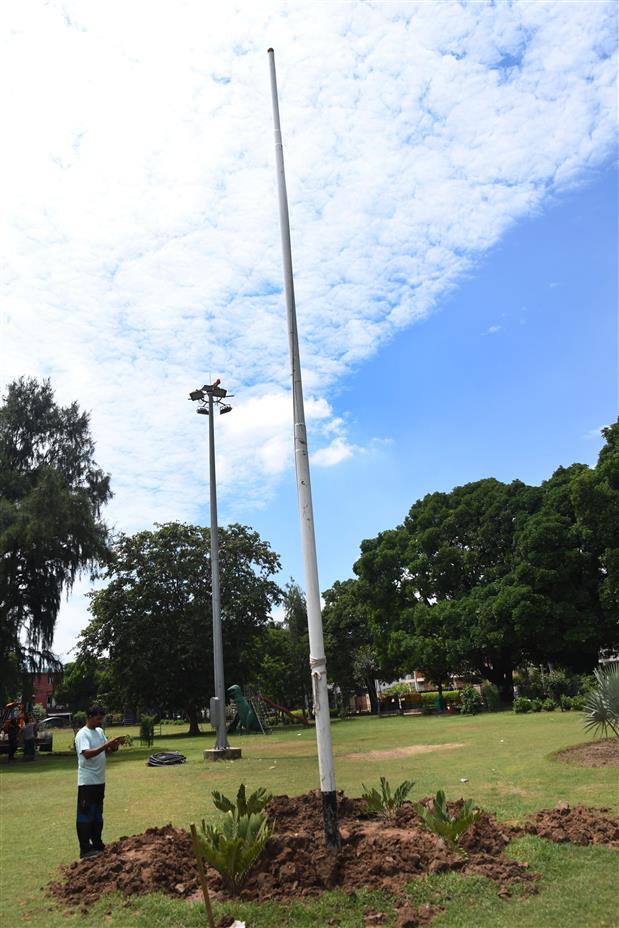 A controversy erupted after the city Municipal Corporation removed a large Tricolour and a 45-foot-tall flagpole on which it was unfurled by residents here at a Sector 21 public park today. The MC claimed the flagpole was put up without seeking permission.

The civic body’s action is discriminatory. We have been maintaining this park for eight years. It should have left the flag untouched after I-Day.Rs Baljinder Singh Bittu, FOSWAC Chairman

The park is MC’s property and structure was raised sans permission. Also, Sector 21 is a heritage sector and the Chief Architect’s nod is must for alterations. Anindita Mitra, MC Commissioner

Members of the Federation of Sectors Welfare Association Chandigarh (FOSWAC) and Citizens’ Association, Sector 21, had jointly hoisted the flag on Independence Day.

Calling the MC action “discriminatory”, FOSWAC chairman Baljinder Singh Bittu said: “We have been maintaining this park for eight years. The MC should have left the flag untouched after I-Day. It would have created a sense of patriotism among people.”

“Area residents are pained at MC’s insult to the Tricolour by removing it unceremoniously and uprooting the flagpole,” he added.

“It is a forcible removal of the Tricolour by branding it encroachment on a public park,” said Pardeep Chopra, secretary, Citizens’ Association, Sector 21.

Refuting the claim, MC Commissioner Anindita Mitra said: “The public park is the property of the MC and the structure was raised without seeking permission. Moreover, Sector 21 is a heritage sector and approval of the Chief Architect is required for any alterations,” she added. An MC official said it was unjustified to demand putting up a structure at a public place even after I-Day.

Meanwhile, on August 15, area residents celebrated the I-Day by performing skits and remembering the martyrs and freedom fighters. A 91-year-old senior citizen, who witnessed Independence, Partition and freedom struggle, hoisted the flag.