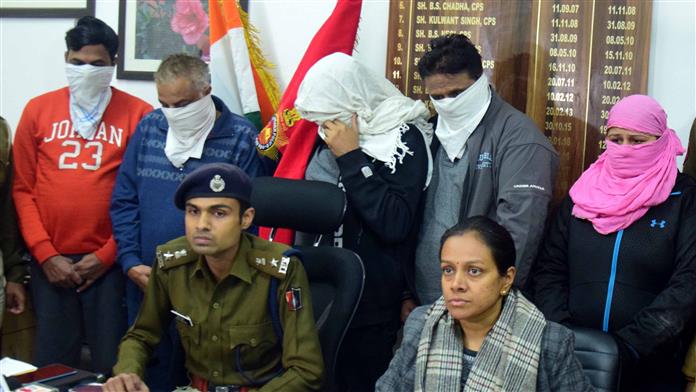 The five suspects in custody of the Economic Offences Wing of the UT police at Sector 17, Chandigarh, on Friday. Pradeep Tewari

Five members of a gang, including a chartered accountant (CA), have been arrested by the Economic Offences Wing (EOW) of the UT police in connection with a goods and services Tax (GST) fraud of around Rs 11 crore.

The police said the EOW had registered a case in December 2019 on the complaint of Sanjeev Madaan, Excise and Taxation Officer, against M/s AK Trading Company.

The complainant had alleged Anuradha Sharma, a maid of Jindal, being proprietor of the company obtained a GST number in connivance with other associates.

As per the registration application applied on the GST portal, the main business of the firm was supply of scrap. However, the Excise and Taxation Inspector in his report in early 2019 claimed there was no business activity from the business premises at Khuda Jassu village.

During the period of registration, the suspects made transactions for payable taxable supplies of goods to the tune of Rs 21.68 crore, but the due tax of around Rs 9 crore was not paid to the government.

In another FIR, the suspects made transactions for payable taxable supplies of goods to the tune of Rs 8 crore, but didn’t deposit the due tax of Rs 2.5 crore.

The police said on December 3, Garg joined the investigation and during questioning, it was established he in connivance with Jindal, Singla and Jain hatched a conspiracy to open fake firms and bank accounts to carry out bogus business transactions and thereafter claiming GST benefits, causing a loss to exchequer.