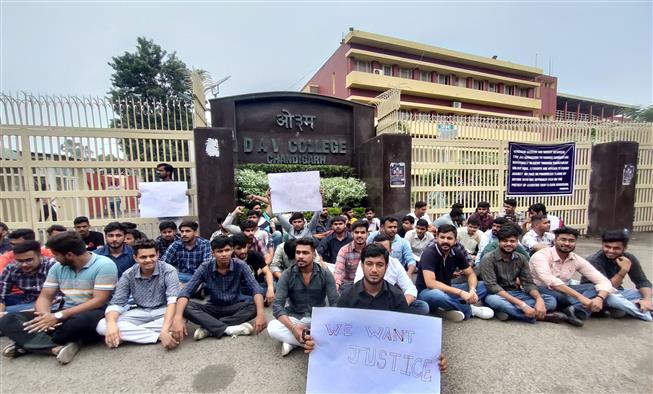 HSA activists stage a protest at the main gate of DAV College, Sector 10 in Chandigarh on Thursday. Pradeep Tewari

A day after the DAV College, Sector 10, management cancelled admissions of five students, several pupils held a protest outside the college demanding a rollback of the decision, today.

On Wednesday, the college management had cancelled the admission of five students, who were reportedly supporters of a student political group, Students’ Organisation of India (SOI), for assaulting two students and members of the Hindustan Students Association (HSA).

The five students were studying in BA (second year). Their entry to the college campus was also banned. The incident took place on Tuesday, and outsiders were allegedly brought inside the campus by these students.

The two students were injured in the attack and were rushed to the GMSH, Sector 16, where they received treatment for head and ear injuries.

Meanwhile, heave police force was deployed outside the college as protesting students gathered in a large number to block the entrance gate.

“The students have been falsely framed in this case. We want a fair inquiry into the matter,” said one of the SOI supporters at the protesting site.

A group of students, who were in a car, was allegedly attacked by a rival group near a petrol pump in Sector 10 here today. No one was injured in the alleged attack.

The car occupants were said to be students of DAV College, Sector 10, and supporters of a student political group, HSA.

“We were going to the SSP office when our vehicle was attacked. By god’s grace, no one was hurt. We were attacked by SOI supporters,” said Sahil, an occupant of the car.

The incident has been reported a day after SOI and HSA supporters indulged in a fight in which two students were injured. A complaint in this regard was filed and the matter is being probed.