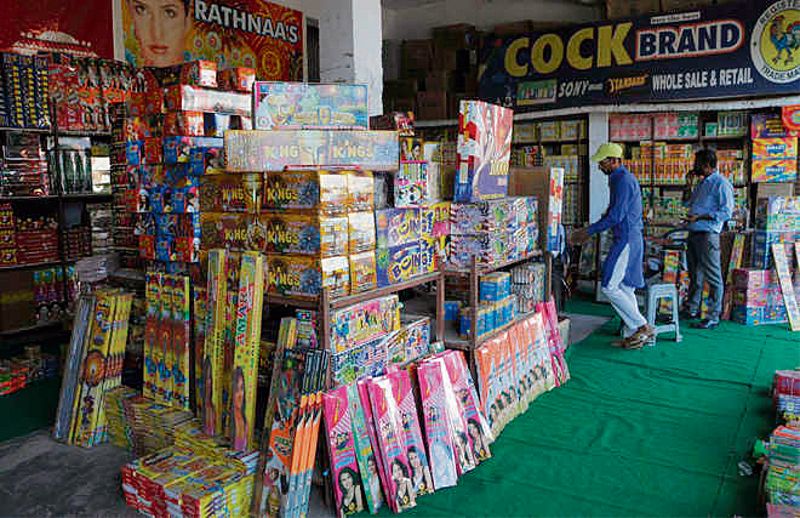 Ahead of the festival season, the UT Administration has imposed a complete ban on the sale or use of crackers of any kind throughout the city. - File photo

Ahead of the festival season, the UT Administration has imposed a complete ban on the sale or use of crackers of any kind throughout the city.

The decision was arrived at after extensive consultation with health and environment experts and other stakeholders. The toxic air rising out of crackers was likely to affect public health. Therefore, residents must avoid bursting crackers this festive season, said UT Adviser Dharam Pal.

The direction is issued as a containment measure to prevent the risk of the spread of Covid-19 due to polluted atmosphere created by bursting of crackers. Dharam Pal, UT Adviser

The decision was taken in view of an order of the National Green Tribunal (NGT) and a possible third wave of the Covid-19 pandemic.

“The direction is issued as a containment measure to prevent the risk of the spread of Covid-19 due to polluted atmosphere created by bursting of crackers,” said Dharam Pal in the order issued under the Disaster Management Act.

The UT Adviser said the order would come into force with immediate effect and remain so until further orders.

The Chandigarh Beopar Mandal criticised the decision of the Administration to impose a complete ban on the sale and purchase of crackers and fireworks and appealed to follow a policy on the pattern of nearby states of Punjab, Haryana and Himachal Pradesh.

“Diwali is the most important Indian festival and celebrated worldwide by all communities. Without firecrackers, this festival seems incomplete,” said Diwakar Sahoonja, spokesperson for the mandal.

The mandal demanded protection of the trade of crackers, which was a source of livelihood for many small and medium traders doing this business for generations, he added.

Appreciating the decision, Ajay Jagga, member, Rogi Kalyan Samiti, Chandigarh, in a letter to UT Administrator Banwari Lal Purohit, stated that the Supreme Court had a few days ago observed that one cannot celebrate at the cost of the life of others. Last year, the NGT had delivered a historic order and a total ban on the sale or use of all kinds of firecrackers was imposed in view of Covid-19 and other factors.

Urging the UT Administration to review its decision, Chirag Aggarwal, general secretary, Cracker Dealers’ Association, said they were going through the worst phase for the past two years. Last year, nearly 1,635 traders had deposited nearly Rs9.50 lakh with the Administration for the issuance of cracker licences, which was still pending with it, he added. He said they were likely to suffer a loss of nearly Rs5 crore, which was paid as an advance to manufacturers of firecrackers by members of the association. Further action would be taken in a meeting of the association on Wednesday.