He wanted a synthetic track in the city 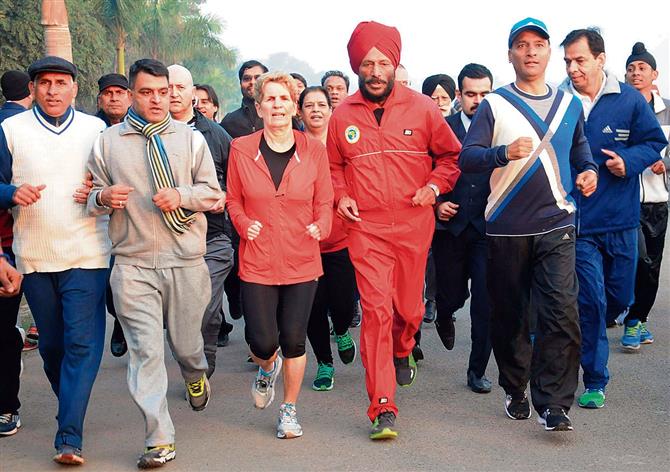 As an athlete, former Indian sprinter Milkha Singh did whatever he could to bring laurels to the nation and Chandigarh, but the UT Administration failed to give him what he wanted the most — ‘one synthetic track’ for local athletes.

During an interaction on July 13, 2015, Milkha had stated: “I wish to see the first synthetic track in my hometown before I leave this world.”

This wish of Milkha went with him to the next world, as the Administration kept on lingering the synthetic track project in files. The project has been under planning for over a decade.

“Yes, it’s disheartening. The project is under consideration. However, we will follow up on this vigorously. We will surely do something big in his name,” said Tejdeep Singh Saini, Director, Sports, UT.

Not only the UT Administration, but the local Chandigarh Athletics Association is also to blame for the delay in the execution of the project. Its members hardly took any initiative in the past 10 years to get a synthetic track here. Despite a series of meetings of the Administration, the UT Engineering Department and the Sports Department, nothing fruitful came out. The project to lay an athletics field was first said to be finalised for the Sector 46 Sports Complex. The project site was later shifted to the Sector 7 Sports Complex, but no concrete step was ever taken.

“This is absurd on the Administration’s part. The right way to honour such a legend is to give him respect and make him an inspiration for youngsters. It’s a shocker for a majority of the local residents that despite having all facilities, the officials failed to have a synthetic track. The Administration, specially its top officials, should give it a thought,” said Parminder, a sports lover.

After making verbal promises, the project to lay an all-weather synthetic track, made of polyurethane, was finally put on paper in 2012. The plan remained limited to the files for the entire one year.

In 2013, when the movie, “Bhaag Milkha Bhaag”, was released, the authorities restarted the process. It was decided to create a full-fledged 10-lane track. However, lack of space restricted the planners to think on a seven-lane track.

The Sector 46 Sports Complex was shortlisted to have the synthetic track. The planning committee, at that time, raised the need for acquiring some area of the Post Graduate Government College, Sector 46, touching the boundary of the sports complex, to make enough space to lay the turf. The project site was later shifted to the Sector 7 Sports Complex. An estimate of Rs3.90 crore was submitted for the eight-lane synthetic turf project.