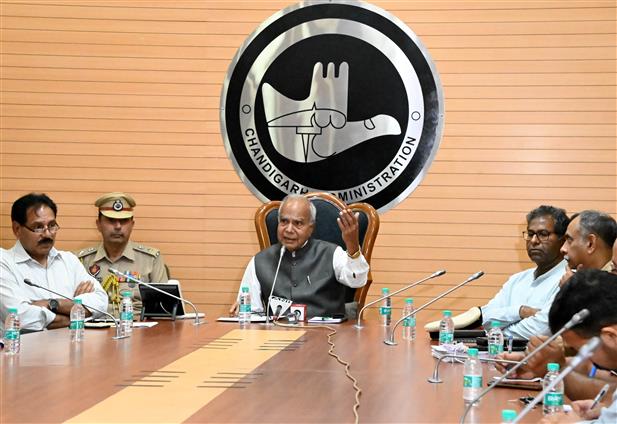 With the Supreme Court recently junking the action taken report (ATR) submitted by the UT Administration on conversion of leasehold industrial and commercial plots to freehold, UT Administrator Banwarilal Purohit, while accepting gaffe, today clarified the administration was in favour of conversion and that a wrong document sent to the Ministry of Home Affairs (MHA) was incorporated in the ATR leading to ambiguity on the issue.

After the SC order, UT officials realised the mistake and further apprised the UT Administrator, who today addressed the media to clarify on the issue.

Purohit said a document prepared during the tenure of his predecessor, Shivraj Patil, in which the UT had reportedly opposed the conversion of properties, was mistakenly sent to the MHA, which was further submitted in court.

There is no doubt we want to help people of Chandigarh. Since the time I joined, I have always favoured conversion of leasehold properties to freehold. Banwarilal Purohit, UT Administrator

It was a long-pending demand of trade and industry. We will request the administration to come up with affordable and hassle-free policy. Chander Verma, Industrial Converted Plot Owners Assn

“There is no doubt we want to help the people of Chandigarh and since the time I joined, I have always favoured the conversion of leasehold properties to freehold,” he added.

The Administrator further said 6,621 commercial properties and 1,451 industrial properties were allotted on leasehold in the city.

He said the Deputy Commissioner was asked to clarify the UT’s stand over the issue with the MHA and submit fresh documents to clear the confusion, following which he met the MHA officials on Monday. The Adviser will also go to Delhi on Wednesday to meet MHA officials to clear the remaining doubts, if any, he added.

The annexure which UT claims was wrongly submitted to the MHA states: “Chandigarh is a landlocked UT with limited land resource. Majority of commercial and industrial plots were allotted on the leasehold basis and ownership of these plots lies with the Chandigarh Administration. If the commercial and industrial plots are converted to freehold, there will be shortage of properties with the administration.

“As the properties had been leased out, the administration is getting annual ground rent from these properties which are a regular source of revenue for the Administration. Government may lose regular income once it is converted to freehold,” submitted the UT.

"Once property is converted from leasehold to freehold, the person is entitled to sale it immediately. So there will be huge windfall gain at the cost of exchequer which can be easily questioned," it was further stated and added "in some cases, multiple transfers have already happened. In that case, chances of legal conflicts may arise on account of huge gain".

However, the SC found all the issues raised by the UT non-tenable and stated: "Let the needful be done within three weeks."

Welcoming the decision of the UT Administrator, Chander Verma, chairman, Chandigarh Industrial Converted Plot Owners Association, said it was a long-pending demand of trade and industry. "We will request the administration to come up with affordable and hassle-free policy," he said.