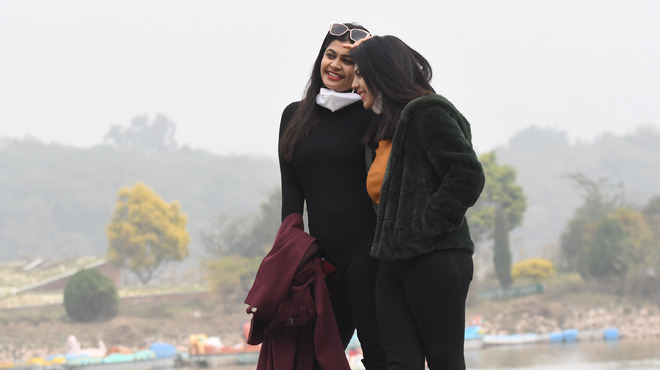 Visitors at Sukhna Lake in Chandigarh on Wednesday. RAVI KUMAR

The city turned colder than Shimla as the maximum temperature dropped to 12.2°C, four degrees less than the Queen of Hills. However, the minimum temperature in both Chandigarh and Shimla remained at 5.7°C.

The City Beautiful witnessed severe cold conditions today, making it chiller than Manali, which recorded a maximum temperature of 14.8°C. However, residents are unlikely to get relief from the foggy weather conditions for one more day.

According to the Chandigarh Met office, the sky is expected to remain generally cloudy tomorrow and shallow fog will continue. However, with moderate fog, the city could witness a clear sky on Friday and Saturday.

The maximum and minimum temperatures in the city are likely to see an increase in the coming days, which could provide the much-needed relief to residents reeling under severe cold weather conditions for the past many days. — TNS