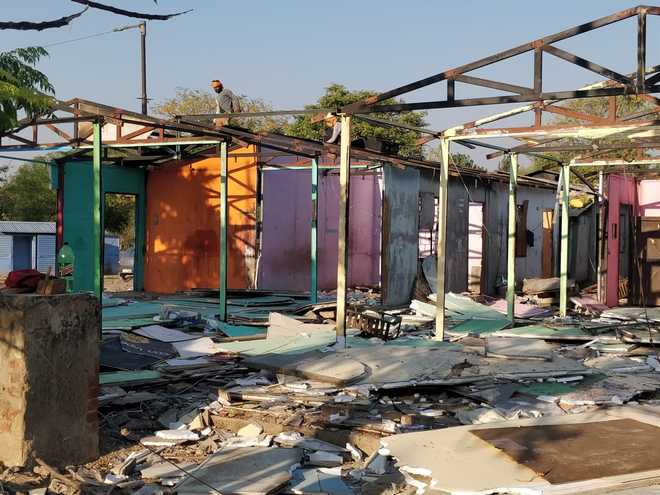 Illegal pre-fab shelters being demolished at Sector 52 in Chandigarh on Saturday.

The Chandigarh Housing Board (CHB) continued its demolition drive in pre-fab shelters in Sector 52 and razed nearly 60 vacant structures here today. The CHB had demolished eight such structures under the supervision of senior police and civil officials yesterday.

The UT Administration had decided to relocate the residents of pre-feb shelters in Sectors 52 and 56 to EWS flats in Maloya-I under the Affordable Rental Housing Complexes (ARHCs) scheme of the Centre.

The CHB has already given allotment letters to 352 residents of pre-fab shelters of Sector 52 and 56 in Maloya-I. Under the scheme, the allottees will be required to pay monthly rent of Rs3,000, which would be increased biennially by eight per cent. The total rental period would be for a maximum of 25 years.

An official said about 280 houses had been evacuated in Sector 52. Of this, nearly 68 houses had been demolished in the past two days. The drive would continue for the next few days.

However, most of the shelters in Sector 56 had already been demolished by the CHB.