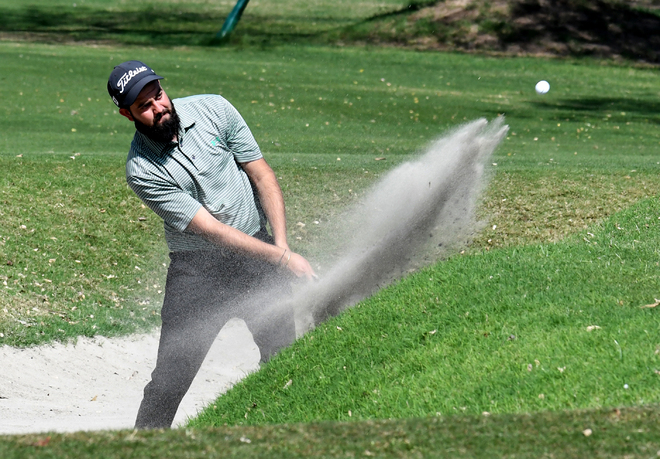 A player in action at the Chandigarh Golf Club on Wednesday. TRIBUNE PHOTO: NITIN MITTAL

Local lad Yuvraj Singh Sandhu and Manu Gandas hogged the limelight in the round two of the Glade One Masters 2021, at the Glade One Golf Resort, Ahmedabad.

Both 24-year-olds, searching for their maiden wins on the PGTI, have been knocking on the doors of victory for some time now.

Overnight leader and local contender Mansukh Sandhu continued his good form to maintain the lead on the second day of the Samarvir Sahi Golf Championship at the Chandigarh Golf Club on Wednesday. Sandhu shot a one-over round of 73 to continue to be the tournament leader with a score of 144. He has a clear five-shot lead over Harmanbir Singh Bajwa, who shot two-over to claim the second position at 145. Another Chandigarh lad Raghav Bhandari was tied-3rd with Delhi’s Shourya Bhattacharya at the score of 146. TNS

The four players bunched together in tied third place with a total of 4-under-68 were Bengalureans Khalin Joshi (34) and Trishul Chinnappa (34), Faridabad-based Abhinav Lohan (34) and Om Prakash Chouhan (33) of Mhow.

The cut was applied at 2-over-74. A total of 46 professionals made the cut. Gandas, one of India’s leading amateurs before he turned professional in 2015, struck a purple patch on Wednesday as he produced five straight birdies from the second to the sixth thanks largely to a hot putter since he sank three birdie putts from a range of 12 to 20 feet on the stretch. He also had two quality up and downs during this phase on the second and fifth.

Sandhu, the 2019 PGTI Feeder Tour Order of Merit champion, had an edgy start as he bogeyed the first with a missed up and down. Sandhu, lying tied-3rd and one off the lead after round one, continued to miss opportunities over the next few holes as his 10-foot putts for birdie didn’t find the hole on the second, third and fourth.

Sandhu’s fortunes changed from the fifth onward where he chipped-in for eagle from 20 yards. He sank two long birdies on the sixth and seventh from 10 to 20 feet. On the eighth, a great approach helped him set up a five-footer for his last birdie of the day.

“At the start of the day I thought my putter was cold. I was also not feeling my best and had a sore back due to playing in totally different conditions over the past two weeks,” said Sandhu.

Abhinav Lohan holed out from 106 yards for his eagle-two on the third during his round of 34.

C Muniyappa of Bengaluru had a hole-in-one on the seventh during his round of 33 that placed him tied-8th at 2-under-70. Round one joint leaders M Dharma (38) of Bengaluru and Anshul Patel (41) of Ahmedabad slipped to tied-14th at 1-under-71 and tied-43rd at 2-over-74 respectively.

The other two Ahmedabad-based professionals who made the cut were Shravan Desai and Jay Pandya, both tied-28th at 1-over-73.