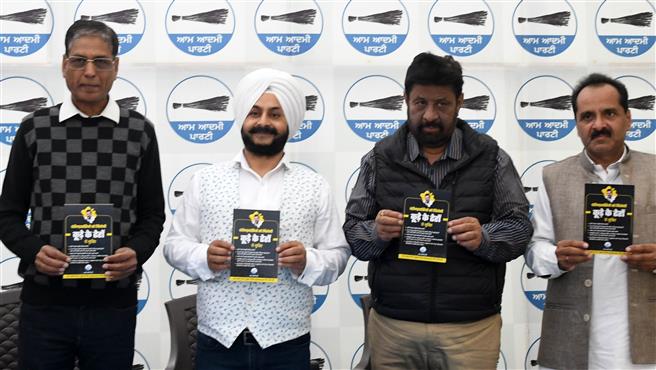 The Aam Aadmi Party (AAP) today announced its second “guarantee” ahead of the MC elections, which are scheduled to be held on December 24.

During a press conference at the party office today, AAP city affairs in-charge and Delhi MLA Jarnail Singh announced the second “guarantee” of providing freedom from piles of garbage.

The AAP leader said the BJP and the Congress had been ruling the MC in rotation for over two decades but failed to clean the city. He said after winning the election, residents of the city would be freed from the mountain of garbage at the dumping ground. “World-class arrangements will be made for waste disposal. Dadu Majra plant will be operated with world-class technology. Apart from this, best arrangements will be introduced to pick up garbage from every house,” he said.

Also, a unique system would be developed to segregate wet and dry waste. The number of sanitation workers in each ward would be increased, said Jarnail Singh.

AAP had earlier given its first “guarantee” of providing 20,000 litre of clean and free water per household per bill. Jarnail Singh was accompanied by the city AAP’s co-incharge Pardeep Chhabra, convener Prem Garg and general secretary Vijaypal Singh. — TNS

The UT Election Department on Wednesday issued a notice to AAP under the Defacement of Property Act. Sources said the party had put up posters and banners in some areas without obtaining permission. On getting information, the authorities concerned removed the posters and banners and issued a notice to the party. An AAP leader said they had hired a firm for outdoor publicity and it put up banners without taking permission. TNS