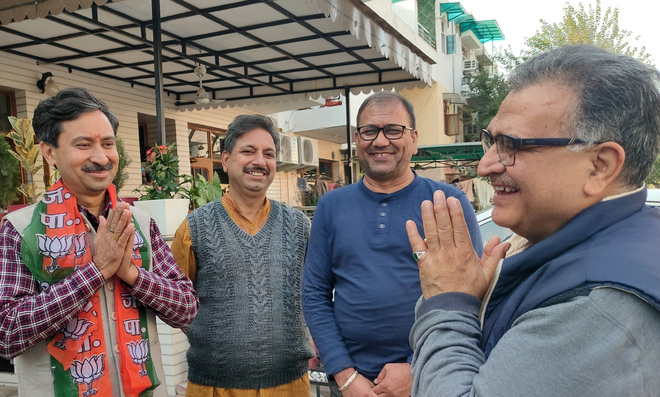 It may be the local Municipal Corporation elections, but the top brass of the BJP, including Home Minister Amit Shah and national BJP chief JP Nadda, will be among the star campaigners of the party in Chandigarh.

Three BJP chief ministers, Yogi Adityanath of Uttar Pradesh, Jai Ram Thakur of Himachal Pradesh and Pushkar Singh Dhami of Uttarakhand, will also campaign for the 35 candidates of the party.

Besides, Hamirpur MP and Union Minister for I&B, Youth Affairs and Sports Anurag Thakur, Bhojpuri film stars and BJP leaders Manoj Tiwari and Dinesh Lal Yadav, popularly known as Nirahua, are the other star campaigners. A list of a total of eight star campaigners of the BJP has been approved by the Election Commission.

If there are more than eight star campaigners, then their expenses are included in the candidates’ account for which there is a limit of Rs 5 lakh per candidate.

“These all leaders are very famous among residents here. Many residents belong to the state of these campaigners. We have not finalised the dates of their visit. So far, December 10 has been finalised for HP CM and MP Anurag Thakur,” said city BJP president Arun Sood.

People of Puravanchal form a large chunk of voters, especially in colonies. By bringing in Bhojpuri stars, the BJP aims at wooing them. Besides, campaigners belonging to neighbouring states of Punjab, Haryana, Himachal Pradesh and Uttarakhand are also coming here as there is a sizable number of people from these states in Chandigarh.