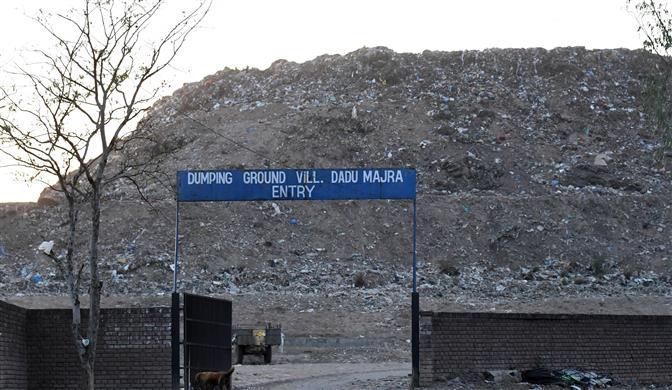 The councillor from ward number 6, Farmila, failed to keep her promise of clearing waste from the dumping ground at Dadu Majra and opening a theme park in the adjoining area during her five-year term. Instead, some residents alleged that she brought more problems than resolving the existing ones.

“The councillor could not get the dumping ground area cleared of waste. Instead, new landfill site and a material waste recovery centre were opened in Dadu Majra during her tenure. The additional waste infrastructure has caused us more problems,” said Dyal Krishan, president, Dumping Ground Joint Action Committee.

“Only old approved works were done in the colony. Paver blocks were laid at a height due to which rainwater enters houses. The link road of Dadu Majra and Sector 38 (West) was recarpeted ahead of 2019 Lok Sabha polls and it was not done properly,” he said.

Harjinder Singh, chairman, Residents Welfare Association, Dadu Majra Colony, complained, “Both the local MP and the councillor had promised to clear the dump. The long wall around the waste site was built only after the court sought to know its height. Street light poles were erected long ago, but lights were not installed.”

Tarsem Rana, former sarpanch of Dadu Majra village, said, “Since my childhood, there is a word around that the waste dumping ground will be cleared. Will it ever happen? However, during the last five years, sewerage and water pipeline works were done in our village. Even two-three transformers were installed, which improved the power supply to the village. A sports facility also came up. The tile work in the streets is pending. We hope it will be done too.”

On her major promise, Farmila said, “The mining of half of the legacy waste is under way. For the remaining half, a tender will be floated soon. The work would have completed in my tenure if there was no Covid-19 outbreak. I got a 20-ft boundary wall built around the dumping ground. Earlier, papers, polythene and other waste used to fly to the residential area.”

Counting her other achievements, she said, “I got roads built and pavers laid in the village and the colony. The main pipelines of sewerage and drinking water, which earlier used to pass from inside houses, were shifted outside. High-mast lights were put up in markets and at the sports stadium.”

Dadu Majra residents said they had been living in a hell-like situation bearing with the foul smell emanating from the dumping ground. Several area residents are facing breathing and other health problems due to it. Besides, smell and leachate also bother commuters.