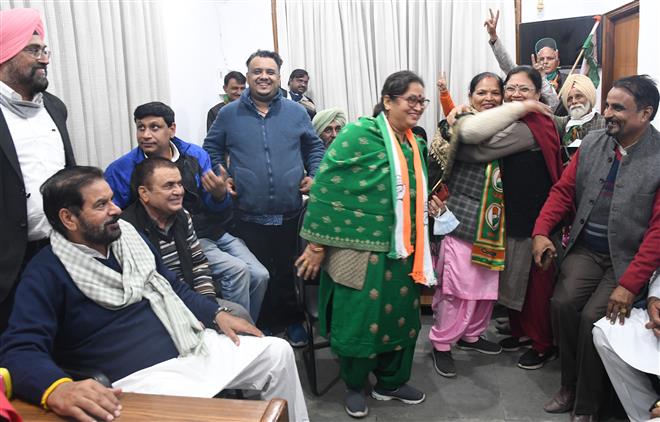 Family members of Congress leaders got a priority in the first list of 30 candidates for the Municipal Corporation elections, announced by the party today.

City Congress president Subhash Chawla’s son Sumit Chawla has been named from ward number 14. The wife (Harpreet Kaur) and sister (Balwinder Kaur) of Leader of the Opposition and Congress councillor Devinder Singh Babla, whose ward has been reserved for a woman candidate, have been nominated from ward number 10 and 22, respectively.

No candidate has been declared for ward number 16 where Sheela Devi is the party councillor. Sources said her candidature was said to be final, but to avoid a conflict, the candidate would be named in the second list. The Congress has five councillors in the current MC House. Jannat Jahan, who was fielded by the Bahujan Samaj Party for the 2014 Lok Sabha elections, has got the Congress ticket from ward number 4.

The list also has the names of six former councillors and a former Mayor. Most candidates come from a business background.

Denying any “parivarwad”, city Congress chief Chawla said, “They have been considered as they were active in the party for a long time and not because of ‘parivarwad’. We have a balanced team, with mostly young faces. We have given a representation to all communities.”

Heated arguments were witnessed after the names of candidates were announced. One of the probable candidates

questioned city Congress president Subhash Chawla why some outsider given the ticket and not him. On this, Subhash Chawla said the election committee had finalised the names.

Ward No. and candidate