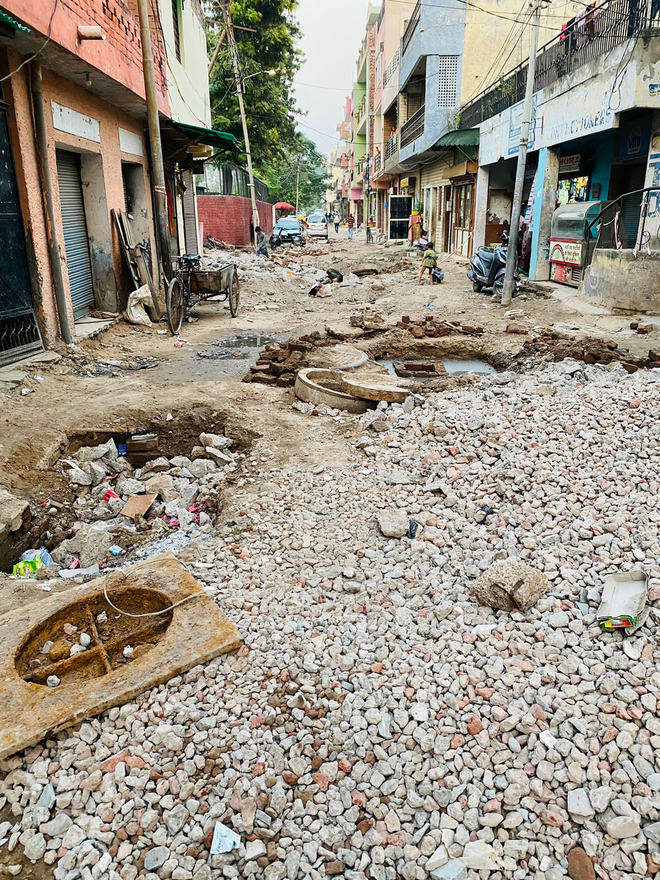 Work underway on a street in Palsora. Pradeep Tewari

A number of promises made to ward number 11 residents by councillor Satish Kainth during the poll are yet to be fulfilled.

Promises, including building a community centre, green belt, new inner road in Sector 56, upgrading the panchayat building in Palsora, completing the sewerage and work on laying a storm water pipeline have not been fulfilled during his five-year term though several works have been started.

“The councillor had promised to set up a big green belt behind our houses, but nothing has happened. A new road was promised to be built for house numbers 4800 to 5500. It later transpire that the “naksha” of the road is not approved and the councillor got only poles erected there,” said Yograj Singh, chairman, Jai Maa Ambe Seva Dal, Sector 56. “In five years, the work on the promised community centre in Sector 56 could not be completed. The councillor earlier tried to inaugurate even though the work had not been completed, but residents protested. The sewer pipeline remains blocked and the dirty water comes on the road, causing foul smell in our sector,” he added.

Joginder Singh, general secretary, RWA, Sector 56, said, “Internal roads were built in our area and lights were put up in parks. However, no other work was done. At some places, poles have been put up sans light fittings. Though sewer pipelines are being laid, there is no drainage and water comes on the road.”

Palsora village resident and local BJP leader Mandeep Singh said, “The anganwadi building in our village was declared unsafe. However, neither was it demolished nor a new building constructed. Even the Sampark Centre here is in a poor state as its water connection has been cut and there is no public toilet. Residents got another blow when the Palsora dispensary was shifted from here. Work on the Phirni road, sewerage and a storm water pipeline has not been completed as yet. Roads have been dug up for pipelines for long, causing inconvenience to residents.”

Chandigarh: The city Congress has invited applications from interested persons who want to contest the forthcoming Municipal Corporation elections. Accordingly, interested persons have been asked to collect application forms from the party office in Sector 35. The applications will be accepted from October 25 to November 10. The forms can be collected during the office hours daily between 11 am and 5 pm. Party leaders said they would give special consideration to prominent city residents and distinguished persons, who have made exceptional contribution to society. — TNS

Satish Kainth: Councillor from ward number 11 (Won on the BJP ticket in 2016, but later joined the Congress)

Result: Other than the community centre, work of none started

In a week or 10 days, I will get the community centre and a new tubewell inaugurated in Sector 56. — Satish Kainth, councillor