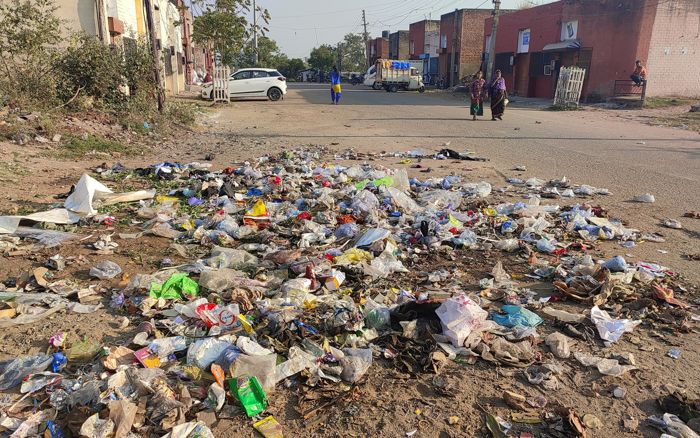 Several open spaces in ward number 20, a picture of neglect, did not improve during the five-year term of councillor Shakti Prakash Devshali.

At least four such sites are there in Sector 29 alone and a few others in the Industrial Area, Phase 1. Stray cattle, wild grass growth, dumped waste/debris, stagnant water and open defecation at these points are the bane of ward residents.

Manjot Singh, a local resident, said, “The open space in front of Shaitan Enclave, Sector 29, is full of wild grass growth and people defecate in the open. The city claims to be open defecation-free, but there is no check on such people. Such points also lead to breeding of mosquitoes due to which cases of dengue rise.”

During a visit to the area, stray cattle were found roaming in in the Apni Mandi ground. The ground also had stagnant water. Another open space across the road too was full of wild grass growth and debris was dumped there.

“We have raised the issue with the authorities several times, but to no avail. The authorities should challan those defecating or dumping garbage/debris here and should also fence the area to maintain it,” a group of residents told Chandigarh Tribune. At the fag end of the term of the MC, road recarpeting work is going on in full swing these days. However, still some stretches are yet to be reacarpeted. Residents rued that for four and a half years, they had to suffer due to bad roads. Unhygienic conditions and garbage dumps can be seen near slums near the Industrial Area, Phase 1.

Harish Chander Chhabra, block president of the Congress and secretary of the RWA, Sector 29, said, “As many as 840 houses are yet to be given ownership rights under the rehabilitation scheme. The rehri market has not been removed from here. Parks are not maintained. Sanitation and street lights are an issue.”

On this councillor Shakti Prakash Devshali said, “The ownership rights issue is there in the entire city and has to be resolved by the Administration. Parks are maintained, only those in congested areas have an issue. Area residents ask us to let them use these parks as parking lots due to space crunch.”

Naveen Manglani, president, Chamber of Chandigarh Industries, said, “Irrational zoning of property tax is our common issue. Besides, we have been asked to clear arrears with interest. Street lights and parking problems are there in the Industrial Area, Phase 1.”