Say recarpeting work slow, going on at selective places only 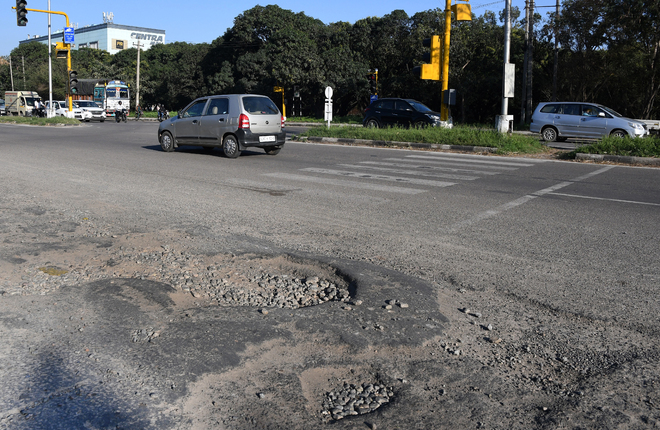 Several potholes are leading to road accidents in the city, but the Municipal Corporation has started recarpeting of roads which are relatively less affected.

The MC has failed to take notice of some of the big potholes in various stretches of roads. It had finalised a list of 61 critical roads, which are to be recarpeted first.

However, roads dotted with yawning potholes have gone unnoticed. Last evening, a motorcycle rider fell on the road due to a big pothole outside Gaushala in Industrial Area, Phase 1, adjoining the CTU workshop.

“The recarpeting work is slow and done at selective places only. The MC should at least fill the potholes at places where it cannot start recarpeting. It is the urgent requirement,” said Manish Yadav, a resident of Sector 38.

Southern sectors are much hit as a number of potholes were spotted in sectors, including 34 and 38 (west). MC officials said they were earlier waiting for conducive weather condition for laying road and now the work has been started. “Wherever we find some major pothole, we fill that at priority,” said an MC official.

In October last year, a 21-year-old boy Vikas died in a pothole accident at Mauli Jagran. However, rather than immediately repairing the pothole, both the Chandigarh Administration and the Municipal Corporation kept putting the blame on each other saying potholed road falls in other’s jurisdiction.

Meanwhile, Mayor Raj Bala Malik, today kicked off the recarpeting work of a V-5 road in Sector 42 in front of Government College of Girls. It has a total length of 1.5 kilometer.

She said, “This road is being recarpeted after five years. The condition of this road was very poor and now this road will be recarpeted with a layer of 30mm thick bituminous concrete at an approximate amount of Rs 12 lakh. I have asked the concerned engineers and contractor to complete the work within one week.”

“They are doing road recarpeting where there is no need. Visit Mani Majra, you will see badly broken roads. The Municipal Corporation should first repair potholes and start work on roads which need urgent repair,” said Prem Garg, convener, AAP.