Chandigarh: Rally ground in Sec 25 a picture of neglect 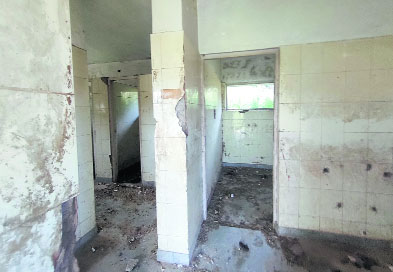 Toilets at the rally ground in Sector 25, Chandigarh. Pradeep Tewari

Behold the ugly sight of the official protest site of the City Beautiful — a broken boundary wall, dirty toilets and the overgrowth of congress grass around the elevated, bricked stage structure. The rally ground of Sector 25 is a haunt for horses, goats, cows and “some anti-social elements who have apparently stolen the iron fences that make for the stage’s boundary”, says Ram Bahadur Mishra of the local Hindu Sanskriti Raksha Sangathan.

Mishra often wanders around the rally ground to keep an eye on the government property. He’s quick to point towards rusty iron sheets, which cover a section of the ground. “This shed was to last long, at least for a period of 20 years, said those who made it maybe five years ago. Now, it’s in ruins. The addicts have stolen the pillars of this shed and even some iron sheets,” he says.

The worst awaited us a few metre away from the fallen shed, the filthy toilets sans doors and windows. Floors with rags, mud, garbage and faeces greet you at the entrance. “All the lights, taps and even the doors have been taken away. At night, this place is a nightmare. It’s a haven for these addicts,” Mishra adds.

The UT Administration has earmarked the rally ground of Sector 25 as the official site for protests, processions and rallies (with permission) in its recent order. When contacted, UT Adviser Dharam Pal said: “We will fix the ground if the protesters go there. We can make all other arrangements as well if required, for drinking water etc.”