Badnore calls for better coordination for optimal utilisation of staff 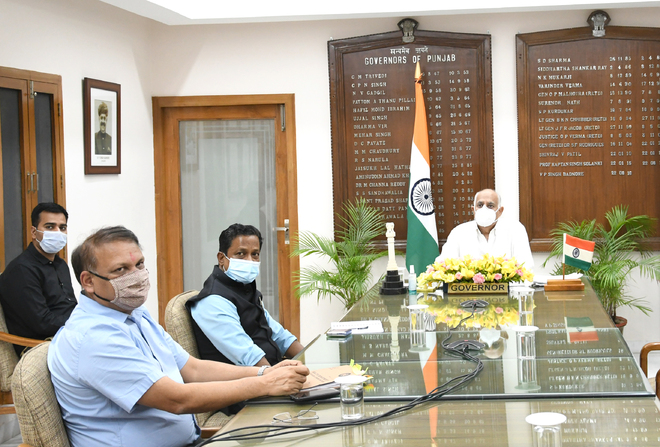 Punjab Governor and UT Administrator VP Singh Badnore with Adviser Manoj Parida during a review meeting on the Covid situation in Chandigarh on Tuesday. Tribune Photo

Three oxygen plants will be commissioned within two days in the city to augment the oxygen supply to patients, this was announced during a Covid review meeting here today.

A Pressure Swing Adsorption (PSA) oxygen generation plant has already been installed at Government Medical College and Hospital, Sector 32, with the help of Government of India, Ministry of Health and Family Welfare, for combating the ongoing oxygen crisis.

The plant will suffice at least 50 per cent of the total oxygen demand at the GMCH-32. It will generate 1000 LPM per day.

Prof Jasbinder Kaur, Director-Principal, GMCH-32, said: “The plant will provide round-the-clock oxygen supply and will definitely help in the fulfilment of oxygen demand in the hospital amid the present Covid pandemic.”

“It will also reduce the number of oxygen cylinders. The plant will generate oxygen gas from air and it will be delivered to the patients through the medical gas pipeline system,” she said.

Dr Bipin Kausal, PGIMER, meanwhile, said they had 244 Covid cases in the Nehru Extension Block, out of which 90 belonged to Chandigarh, 82 to Punjab, 42 to Haryana, 18 to Himachal Pradesh and 12 were from other states.

Dr Kausal informed that they had tested 4,588 Covid samples, out of which 1,360 were found positive.

Doctors also mentioned about an alarming development in which many patients were found to have been infected with Covid even after receiving the first dose of vaccine.

Dr Jasbinder Kaur said they had tested 2,739 Covid samples, out of which 367 were found positive, which implies a positivity rate of 13.4 per cent.

Dr Amandeep Kang, Director Health Services, said they had tested 12,595 Covid samples, out of which 2,149 were found positive. The positivity rate thus stands at 17 per cent.

She also mentioned that the fatality rate in Chandigarh during the last month was 0.5 per cent.

Dr Kang further informed that 59 per cent of health workers and 67 per cent of front-line workers in Chandigarh had got themselves vaccinated.

Punjab Governor UT Administrator VP Singh Badnore expressed serious concern about the alarming rate at which the Covid cases were increasing in the city.

Badnore directed all medical institutions to enhance their capacity of beds and store adequate quantity of medicines and equipment to handle the increasing number of patients.

He also directed the PGIMER authorities to convert Infosys Sarai into temporary hospital, where at least moderate patients could be kept and treated.

Badnore also suggested that some spare technical health staff should be deputed from PGIMER to GMCH-32 or GMSH-16, where temporary staff shortage was being faced.

He asked for better coordination among all three medical institutions for optimal utilisation of staff.