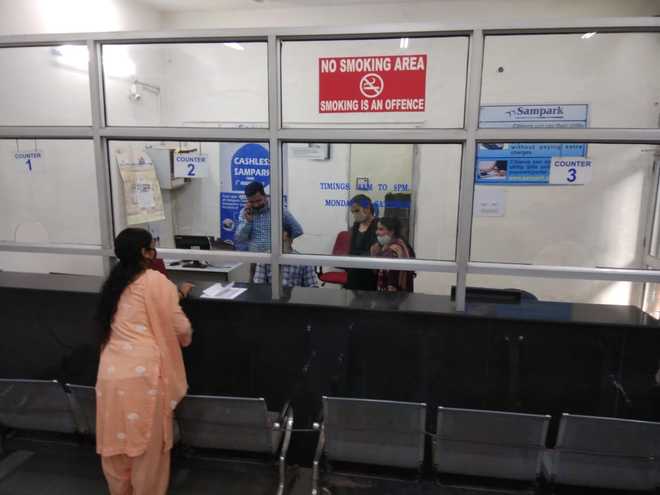 OPD registration being done at the Sampark centre, Sector 15, under a pilot project of the UT Administration.

Soon, registration for the OPD facility at Government Multi-Specialty Hospital (GMSH), Sector 16, will also be done at Sampark centres in the city.

After the success of a pilot project, which was launched from the Sampark centre in Sector 15 on September 10, the UT Health Department is going to start the GMSH OPD registration facility at all Sampark centres by the end of this month.

‘Waiting for printers for barcoding cards’

The Sampark centres are in the process of procuring printers for printing barcode on the OPD cards. As soon as the centres get the printers, the facility will be launched across the city. — Yashpal Garg, Secretary, Health, UT

The department had decided to start the OPD registration at the Sampark centres for convenience of the general public and to avoid long queues at the GMSH. The registration will be done on the payment of a fee of Rs10.

The decision was taken after Yashpal Garg, Secretary, Health, UT, visited the OPD and emergency wards of the GMSH on September 6 and saw a huge rush for registration. Garg observed that it was difficult to maintain social distancing at the registration counter.

After discussing the matter with the Society for Promotion of IT in Chandigarh (SPIC), the department decided to start the OPD registration at the Sampark centres.

On an average, 10-12 patients are availing themselves of the facility every day at the Sector 15 Sampark centre. Registrations are being done from 8 am to 11 am. After getting the registration done, the patient can directly go to the OPD at the GMSH for consultation with the doctor concerned.

Garg said they were getting requests from different parts of the city to start the facility in their localities. “The Sampark centres are in the process of procuring printers for printing barcode on the OPD cards,” he said, and added that as soon as the centres would get the printers, the facility would be launched across the city.

“We are likely to get the printers in 10-15 days, but even if we get some printers in the next few days, we will immediately start the facility, as training of the staff has been completed,” he said.