Officer runs into trouble with case of abetment to suicide 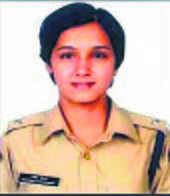 Manisha’s name was approved by MHA

The city’s wait for its first woman SSP (Traffic and Security) may get longer as 2011-batch IPS officer Manisha Chaudhary, who is at present the SP, Panipat, has run into trouble with a case of abetment to suicide against her and two other cops in Haryana.

Manisha’s name was approved by the Centre earlier this month for the post of the UT SSP (Traffic and Security) on an inter-cadre deputation from the Haryana cadre to the AGMUT cadre for three years.

Manisha was set to join as the SSP (Traffic and Security), but former councillor Harish Sharma jumped into a canal near Binjhol village in Panipat last week. Sharma’s family alleged that he was being harassed by the police.

Haryana Health Minister Anil Vij had set up a SIT to probe the incident. Vij had ordered that Manisha should not be relieved for her deputation till a report was submitted.

The post fell vacant after DIG Shashank Anand was relieved of the charge on July 29. SP (Crime and Headquarters) Manoj Kumar Meena is officiating as the SSP (Traffic and Security).

Manisha’s name was approved by MHA

The name of Manisha Chaudhary, who is at present the SP, Panipat, was approved by the Ministry of Home Affairs (MHA) earlier this month for the post of the SSP (Traffic and Security), Chandigarh, on an inter-cadre deputation from the Haryana cadre to the AGMUT cadre for a period of three years.