Chaudhary Harbhagwan Singh: Age was just a number for ex-AG of Punjab, Haryana 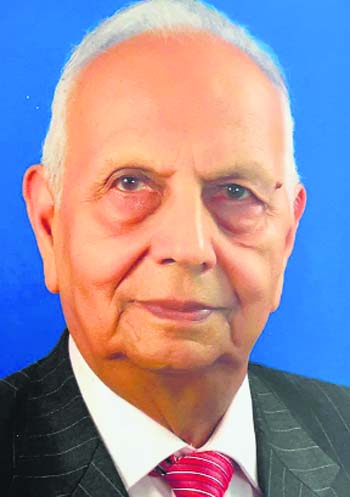 Age never caught up with Chaudhary Harbhagwan Singh. Designated senior advocate by the Punjab and Haryana High Court way back in 1976, the 93-year-old former Advocate-General of Punjab and Haryana was always youthful in his spirits and lively in body and mind. No wonder, the news about his passing away this morning was met with incredulity.

Describing him as “remarkable, unique man”, those who know him say even his body did not give way to the years. Upright as he was, Chaudhary Harbhagwan Singh was always steady on his feet and moved in an energetic and confident way. Up-to-date on law, prevailing conditions and current events, he would dig in the past only to apply his experience to the present and the future.

Associated with several high-profile cases involving politicians and inter-state disputes, he practised in the Supreme Court and the Punjab and Haryana High Court. The important cases he was associated with include the Satluj-Yamuna link canal dispute between Haryana and Punjab and the Sahajdhari Sikhs.

Available information suggests he was also associated with land reforms during the time of Punjab’s former Chief Minister Partap Singh Kairon and former Prime Minister Jawaharlal Nehru. He is survived by wife, two sons and a daughter, who recently retired as a Judge of the Punjab and Haryana High Court.

Expressing grief over the demise of Harbhagwan Singh, Bhupinder Singh Hooda, former Chief Minister of Haryana and Leader of the Opposition, said: “He made his invaluable contribution to the establishment of Haryana and always fought in the interests of the state. I have today lost a close friend and an important family member”.