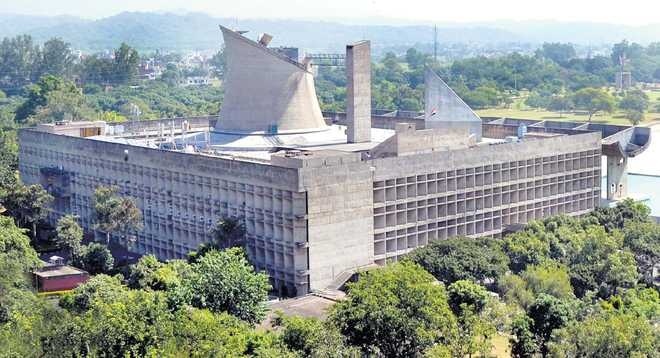 The Chief Engineer has also questioned the city’s heritage tag.

Questioning the works of Le Corbusier, UT Chief Engineer Mukesh Anand, who has been tasked with the restoration of the Capitol Complex, today called it a “nude” building, besides terming it a blunder by the Swiss-French architect.

It is a totally concrete building. All buildings built in the Mughal or British era were covered. However, this building (Capitol Complex) is ‘nude’. This was a blunder Corbusier made. He did not know the real extreme temperature here. He has designed buildings like those in western countries. We have extreme weather; we have summer, monsoon and winter too.Rs— Mukesh Anand, UT Chief Engineer

“It is a totally concrete building. All buildings built in the Mughal or British era were covered. However, this building (Capitol Complex) is ‘nude’. This was a blunder Corbusier made. He did not know the real extreme temperature here. He has designed buildings like those in western countries. We have extreme weather; we have summer, monsoon and winter too..,” said Anand during the Urban Transformation Summit-Chandigarh held at a hotel in Sector 35.

“This is a six to seven-decade-old building and it has started developing cracks. Water has penetrated inside, resulting in disintegration. I was responsible for restoration of the building. I found a lot of problems. What is its life? 75 or 80 years? What will happen after that? Today, we have restored it and injected life into it. However, what will happen after sometime? The way our team has worked with passion, I do know anybody will be able to do it in the future,” the Chief Engineer said.

He told the gathering, “The building needs a lot of replacements. That is a blunder Corbusier made. No doubt, he is a legendry (man) for the way he has planned things.”

Chandigarh was designed by Corbusier to realise the dream of first Prime Minister Jawaharlal Nehru.

“The building is very good if you have a constant temperature. India had never sought a heritage status for the Capitol Complex, but other countries wanted us to seek it. With the heritage tag, the Capitol Complex has the same status as that of the Taj Mahal and the Red Fort even though it is just a seven to eight-decade-old building,” he said.

UT Chief Engineer Mukesh Anand also seemed critical of the UNESCO move declaring Chandigarh a heritage city. During his address, he said it caused a major trouble in the development of the city. “Government houses have been created in a small area by him (Corbusier). Allottees want more space. However, we cannot do anything due to their heritage status. Sectors 1-23 come under the city heritage. We are facing a lot of problems. However, his artefacts are appreciable. Even a manhole sells for Rs 50 lakh aboard.”