Area councillor says in case of leakage, it leads to water contamination 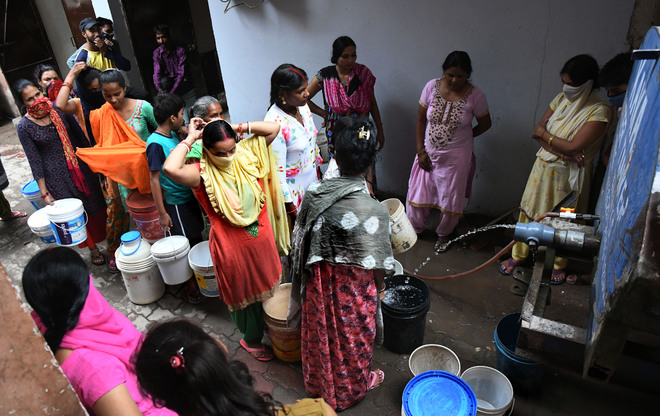 Residents fetch water from a tanker at Abheypur village.

Sewer pipelines run parallel to or cross water pipelines at Abheypur village, leading to contamination of water in case of a leakage, the area councillor told Chandigarh Tribune. Rajesh Kumar, councillor from ward number 9, said the pipelines, which were laid around 25-30 years ago, were too old and needed replacement. He said, “I had written to the Haryana Shehri Vikas Pradikaran (HSVP), which is responsible for the water supply in the area, to get the pipelines replaced. Acting on my letter, they had started work on laying new pipelines in the area after floating a tender. However, it came to a halt as the contractor had not acquired the requisite permission.”

Many cases cropped up in a street (house number 31 to 34) where the HSVP claimed to have rectified leakage in five connections recently.

An HSVP official said considering the gravity of the situation and panic among people, efforts were on to ensure there was no leakage in the water pipeline.

Abheypur is one of the two affected villages from where most suspected cholera cases have been reported since yesterday. It has a population of around 35,000, mostly migrants from Uttar Pradesh and Bihar.

Amit Rathee, Executive Engineer, HSVP, said, “According to their assessment, Abheypur village has a cluster of houses and people live in crowded conditions in each house (in some cases up to 20 families). An unusual increase in water connections aggravates the already complex water supply system in such areas.”

“It makes it difficult to detect a fault and maintain the potable water supply system,” he said.

He said people in such densely populated areas did not disinfect water storage tanks at their houses.

“The bacteria level generally rises in the rainy season, which leads to contamination of water,” the HSVP official said.

The HSVP has stopped the water supply in the “most-affected area” and it is being disinfected.

“Our team, including and SDO and a JE, were on the spot. The supply will be restored after doing the needful,” he said.