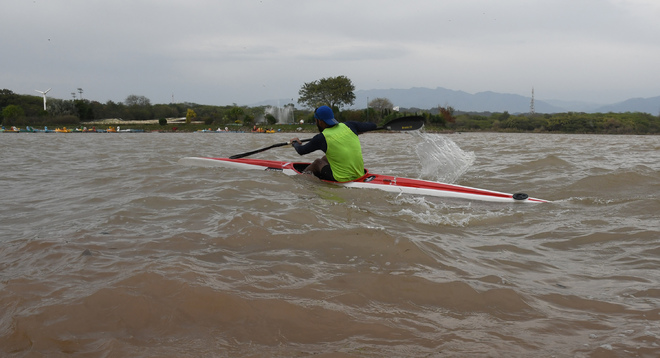 A rower faces hard time as he is rowing in the heavy winds during a cloudy day at Sukhna Lake in Chandigarh on Thursday. TRIBUNE PHOTO: RAVI KUMAR

As the four-year term of the Chandigarh Olympics Association (COA) is coming close to completion, more controversies have emerged.

“The COA is believed to have awarded affiliation to the association at the time when it was not even registered under the Societies Act. Interestingly, ‘rowing-sweep’ has same meaning, but the COA just want to add on to their vote bank. This body has not conducted a single tournament in two years,” said Rajiv Sharma, associate joint secretary, honorary secretary, CRA.

Defending all allegations, the COA said the CRA went defunct in 2011 and had been circulating fake documents. “The CRA was defunct in 2011 as its president, general secretary and treasurer resigned due to which its affiliation was withdrawn. In the meantime, the other party applied and it was given affiliation. There’s no big deal if the letter was issued on August 15 and the Rowing and Sweep Association was already registered under the Societies Act. The documents pertaining to its registration in December are fake and circulated by the CRA. The CRA has never applied for affiliation after 2011. The national federation has given affiliation to CRA on fake documents signed by a former office-bearer of COA Ravinder Talwar, which we have already challenged. These are illegal and do not exist as per the national body constitution,” said Maha Singh, secretary, COA.