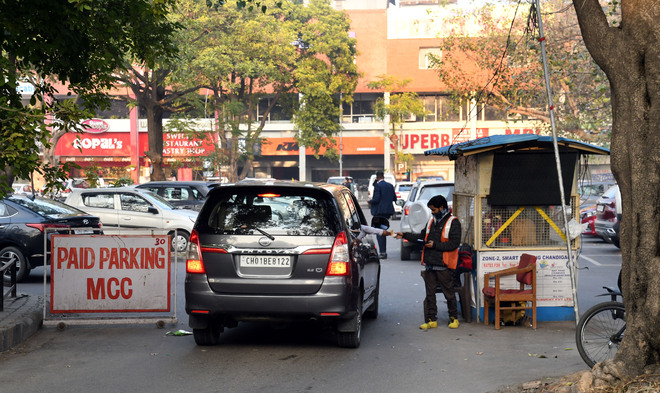 A worker collects fee from a motorist at a parking lot in Sector 8, Chandigarh, on Wednesday. PHOTO: RAVI KUMAR

Hourly parking rates are likely to be applicable at all parking lots across the city from February.

The contract of 89 parking lots was given to two agencies in January last year. The Chandigarh Municipal Corporation had earlier allowed one of the agencies to charge visitors on an hourly basis at the parking lots in a phased manner. The other firm was not permitted to do so as smart features were not added to lots under it.

An MC team will inspect parking lots on January 31. If smart features have been added to the parking lots being managed by the firm concerned, it will be allowed to charge visitors on an hourly basis.

According to MC Commissioner KK Yadav, an MC team will inspect the remaining lots on January 31. “If smart features have been added to the parking lots being managed by it, the firm will be allowed to charge the visitors on an hourly basis,” he said.

Smart parking features include adequate parking attendants to manage vehicles, boom barriers, parking at designated places and proper display of information regarding the 10-minute free parking facility. However, the features are lacking at many parking spaces.

A Sector 35-C store owner lamented: “Some of the street lights inside the parking lots are non-functional. Roads are full of potholes. Attendants are present only at exit and entry points, but do not manage vehicles inside the space. Whether you find parking space is not their problem. Two-wheelers and four-wheelers are not parked at their designated spaces.”

RK Garg, president of a senior citizens’ body, has already asked the MC to make its contracts public. “The firms should not be allowed to charge on an hourly basis even in a phased manner till they add smart features to all parking lots,” he said.

Parking rates, except outside malls, for two-wheelers and four-wheelers are Rs5 and Rs10, respectively. It was approved in the MC House that after smart features are added to the parking lots, the rates will be doubled after the first four hours of parking. In the third slab, after 12 hours, the parking fee will be doubled again till 24 hours. There will be no charges for the first 10 minutes.