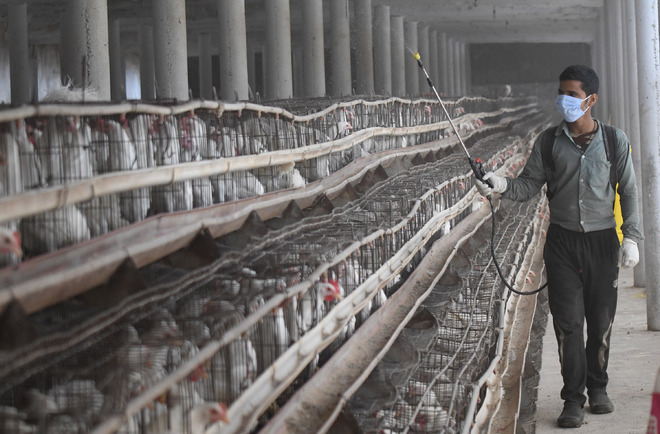 A delay in the arrival of reports from the National Institute of High Security Animal Diseases (NIHSAD), Bhopal, for confirmation of avian influenza at more poultry units in the Barwala belt can cause the disease to spread further.

The samples from the Jalandhar-based Northern Regional Disease Diagnostic Laboratory (NRDDL), which reported bird flu in samples of four more poultry farms other than two epicentres detected earlier, was dispatched to Bhopal on January 8 for confirmation, as per the standard protocol, and reached there the next evening.

At least four days have passed since then, but confirmatory reports from the lab are still awaited.

When asked about the delay in the arrival of reports, Deputy Commissioner Mukesh Kumar Ahuja said they were taking regular updates from the Bhopal lab on confirmatory reports sent by the NRDDL, Jalandhar. “We are being told that the lab is receiving samples from across the country and is under immense pressure. Hence, it is taking more than the usual time to provide reports,” he said.

The epicentres will rise in an event of confirmation of bird flu at more poultry farms, following which a new action plan will come into existence. As a result, the infected zone and the number of birds to be culled will increase.

The district administration today culled a total of 7,770 birds at Narender Poultry Farm to contain the spread and break the chain of transmission of avian influenza or bird flu. This was the fifth day of its culling drive.

For the third consecutive day, more samples were taken from poultry farms located in the radius of 10 km of the epicentres.

Yesterday, two poultry farms — Naveen and Sunil in Kheri village — were excluded of the infected zone.

The Deputy Commissioner had claimed that these were found falling beyond 1-km radius of the epicentres when it was measured again.

While culling operations at two epicentres — Siddharth and Nature — have already been completed, the drive is underway at Narender Poultry Farm.

India and China are locked in a bitter border standoff in ea...