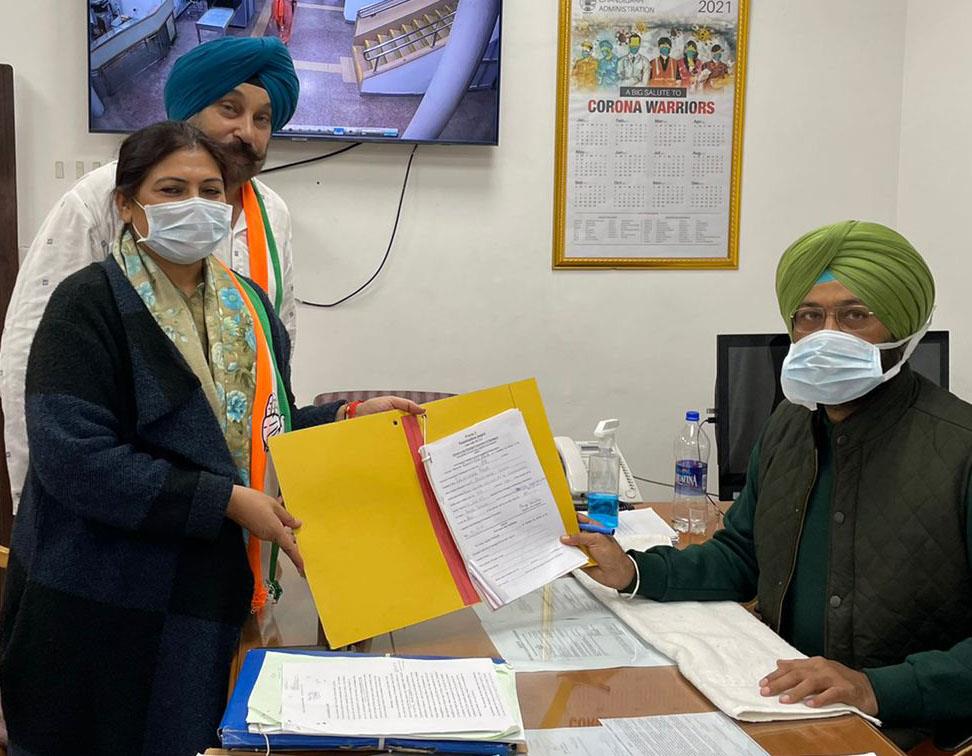 Cong candidate from Ward 22 Balwinder Kaur files her papers. She is the richest candidate.

Leader of the Opposition Devinder Singh Babla’s sister turned out to be the richest candidate while his wife emerged as the second richest candidate on the last day of filing of nominations for the Municipal Corporation elections scheduled to be held on December 24. The declared assets worth crores belong to the candidates and their respective spouses.

A total of 322 candidates filed their nomination papers as the process concluded today. The scrutiny of nominations will take place on December 6 while December 9 has been fixed as the date for withdrawal of candidature.

Congress candidate from Ward Number 22 Balwinder Kaur (Babla’s sister) and her husband Roopinder Singh, a senior party leader, have assets worth Rs 35,51,74,856. The couple’s income has grown significantly in the past five years. In the 2016 MC elections, they had total assets worth Rs 26,03,01,696.

Among moveable assets in their affidavit submitted to the election commission, Balwinder has jewellery worth Rs 40 lakh while her husband has Rs 10 lakh worth of jewellery. Besides, they have mutual funds, PPF, insurance, FDs and a car each with VIP numbers. Their immovable assets comprised of a 17,000 sq ft plot in Industrial Area, Phase 8-B, Mohali; a house in Sector 27-A, investments in development construction and rental income. They have no liabilities/dues to any public financial institution and the government. By profession, the candidate is a homemaker and her husband is into road construction business. Balwinder, who was earlier in the BJP, had contested the previous election on SAD ticket, but lost by a thin margin.

Congress councillor Babla and wife Harpreet Kaur Babla, who is contesting from Ward Number 10 (a seat reserved for women), have the second highest assets (Rs32,79,33,928) among the candidates. The couple’s income has increased by a big margin in the past five years. In the 2016 MC poll, they had declared about Rs23 crore worth of their assets in an affidavit filed before the election commission.

In this year’s affidavit, Babla and his wife have listed their moveable asset as Rs1.25 lakh and Rs1 lakh cash in hand, besides FDs, PPF, FDRs, glexi deposits, bonds, shares, postal savings and insurance.

It seems the couple has a fancy for cars. Babla, a businessman, owns five vehicles, including a Mercedes Benz, KIA Seltos, Toyota Innova, Maruti Esteem and an E-vehicle golf cart.

Harpreet Kaur, a homemaker, has a Mahindra Thar. The current councillor has jewellery worth Rs48.90 lakh while his spouse has Rs45.36 lakh worth of gold and Rs12.90 lakh worth of diamonds. Babla also owns a licensed .30 BA rifle and .30-bore pistol worth Rs2.50 lakh.

Among thir immoveable assets is agriculture land in Parol village. The duo owns commercial buildings, including plots in Industrial Area, Phase 2, Sector 82, Mohali, an SCF in Sector 27-D, share in SCOs in the grain market, Sector 26, and Mullanpur, and several other properties the total worth of which is Rs29,40,00,000. The two have a small loan of Rs7,72,659.

The Congress candidate from Ward Number 33, Vijay Singh Rana, a businessman, and his spouse, a housewife, have assets worth Rs26,32,00,000. They have properties in Burail, Sohana and a house in Sector 21-C. Interestingly, the crorepati couple has a Rs7,000 loan to repay which they had taken to buy a Honda Activa.