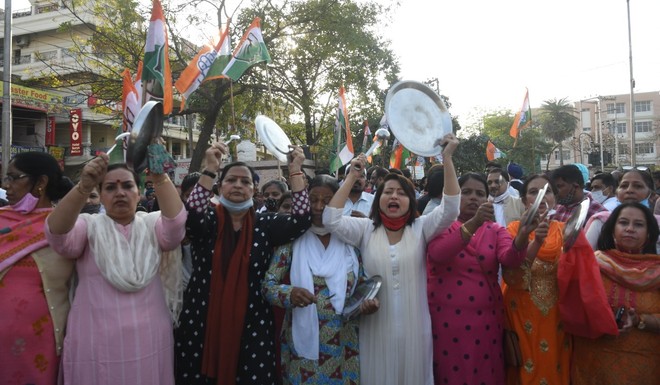 The local unit of the Congress today carried out a protest march in Sector 45 over water tariff hike.

Congress activists had planned to march to the houses of BJP councillors Chandrawati Shukla and Kanwarjit Rana, who live in Sector 45. However, to avoid any untoward incident, the police had put up barricades on the road to stop them.

When Congressmen led by local party chief Subhash Chawla tried to cross barricades cops used water cannons to stop them. Congress spokesperson Harmail Kesari said, “We were protesting peacefully, but water cannons were used on us.”

Meanwhile, BJP leaders termed the plan to gherao its councillors as a political stunt. “We are already bringing the revision agenda in the House, then why protest?” said a BJP leader.

Last week, when as per its plan the Opposition party tried to gherao residences of BJP chief Arun Sood and Mayor Ravi Kant Sharma, who are also elected councillors, the Saffron party had also taken to roads.

The police had a tough time in controlling them.

The Congress said the plan to gherao the ruling party councillors would continue as per weekly schedule to “open their eyes” over the water tariff hike issue.