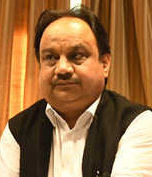 Former Deputy Mayor Satish Kainth has written to Mayor Raj Bala Malik to convene a physical meeting of councillors for the month of September. - File photo

Former Deputy Mayor Satish Kainth has written to Mayor Raj Bala Malik to convene a physical meeting of councillors for the month of September.

Kainth, in his letter, said: “All RWAs, MWAs and NGOs are seeking replies on agendas regarding development works”.

“The last meeting held through video-conference failed to address the problems,” he said.

In his letter, the Congress councillor also raised the issue of hike in water tariffs, UT’s dismal performance in Swachhta rankings, issue of segregation of garbage and employees’ protest regarding their salaries.

Some of the councillors have alleged that their window was put on mute during the previous video-conferences when they tried to raise the issues of their wards.

Councillors are also of the view that as their number is less in comparison to the space in the House, there should be no problem in convening the House meeting following social distancing norms.

“Please, convene the next meeting physically with standard operating procedure of Covid-19,” Satish Kainth has written in the letter.