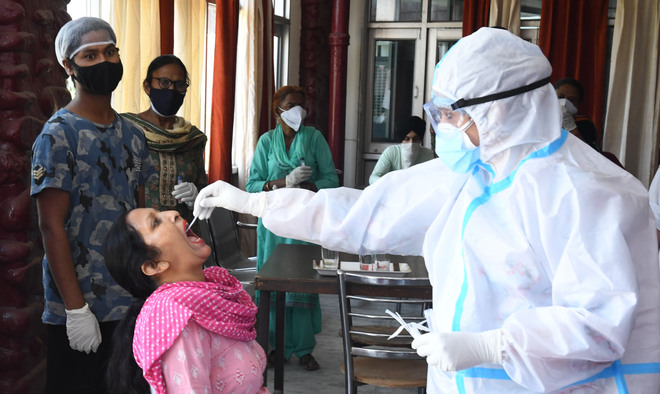 A sample being collected at the PU on Sunday. file photo

“A payment amounting to Rs71,87,000 has been made to Atulaya Laboratories for RT-PCR testing by the National Health Mission, UT, till June 10,” read the RTI response to a query sought on the funds reimbursed to private laboratories in Chandigarh by the UT Administration for providing the RT-PCR report within 24 hours in the past two months.

No death in Chandigarh after 82 days, 22 infected

Chandigarh: The city reported a new low of 22 fresh Covid cases in the past 24 hours. No Covid death was reported for the first time in 82 days. Before this, it was on March 30 when the city had reported zero fatality. The UT has so far recorded 53 deaths in June, whereas 275 deaths were recorded in May. In the past one week, 2.8 per cent of the samples tested positive. TNS

No fatality in Mohali, 27 test positive

Mohali: The district on Sunday reported no fresh fatality while 27 persons tested positive for Covid-19. Meanwhile, 47 patients were cured during the past 24 hours. Among the new cases, six came from Mohali (urban), one each from Lalru and Banur, three from Boothgarh, four each from Dera Bassi and Dhakoli and eight from Kharar. No case was reported from Kurali and Gharuan. TNS

Panchkula: The district on Sunday reported two deaths and five new cases of coronavirus. While 30,054 patients have recovered from the infectious disease so far, 102 cases are still active. The recovery rate is 98.45 per cent. TNS

Failing to expand the RT-PCR testing capacity in government institutions, the UT Administration had roped in private testing laboratories to meet the target set by the Union Health Ministry. The ministry had asked the UT to increase the share of RT-PCR tests to 80 per cent of the total tests.

The UT Administrator directed the PGI authorities to enhance the sample testing to 1,200 per day and the GMCH, Sector 32, was asked to increase the capacity to 400 RT-PCR tests per day, but the capacity could not be stretched beyond 950 samples a day. The turnaround time in RT-PCR Covid reports was more than three to four days in government laboratories, which was causing a delay in contact tracing and a rise in the infection spread. Consequently, on the pattern of Haryana, the UT Administration had to rope in private players to help increase the ratio of the RT-PCR testing ratio as per the instructions of the Centre.

The UT Administration had decided to pay Rs500 per sample to private laboratories to give the Covid-19 report within 24 hours.

The UT Health Department sent samples collected by it to private laboratories and reimbursed them for it. Principal Health Secretary of the UT Arun Gupta said, “The decision to rope in private facilities in the second wave was the need of the hour. The turnaround time of RT-PCR was exceeding three days. We reimbursed private laboratories for taking our samples and giving the report on time. The practice has been stopped now as the government laboratories of the PGI and the GMCH have enhanced their capacity of RTPCR testing.”

Government Multi-Speciality Hospital, Sector 16, is yet to purchase a gold standard RT-PCR machine that can augment the capacity of tests and decrease reliance on other health institutes for Covid tests. On the contrary, the general hospital in the neighbouring district of Panchkula, which earlier used to be dependent on Karnal for Covid testing, has set up its own laboratory and has a capacity of testing around 2,000 samples a day. The GMSH-16 has a TrueNat machine that gives results in three to four hours, but is only meant for testing of emergency cases and not mass-scale testing.