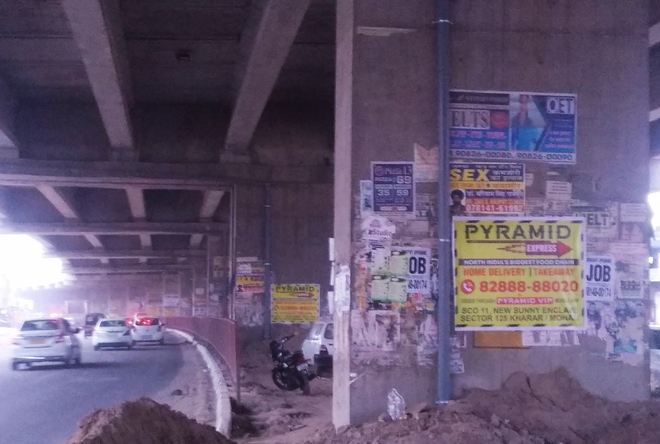 Posters have come up on pillars of the incomplete elevated bridge on the Mohali-Kharar road. Photo: Vicky

Even before the second part of the Kharar flyover is thrown open to commuters, the defacement of the project has already begun.

Posters, hoardings, pamphlets and commercial advertisements have sprung up on pillars underneath the flyover in various places, ruining the outlook.

“Passing through the stretch underneath the flyover, the traffic is chaotic, sound of horns and a plethora of commercials advertisement on pillars make it an unpleasant experience. Hundreds of crores have been spent on the project, but what does a commuter get in return?” said Jaspreet Bhangu, a Kharar resident.

NHAI officials are optimistic that the second phase of the Kharar flyover will be thrown open on December 15. The 1.5-km stretch between Balong and Mundi Kharar was opened on a pilot basis to access the practical problems. The Kurali side of the flyover would also be opened in January next year, said the officials.

Though the project is under-construction, the waste material of the shops, plastic refuse and stray cattle have already made it a home. “People too have to show restraint and act responsibly if they want to see the area neat and clean. The NHAI cannot be held responsible for everything,” said an official.