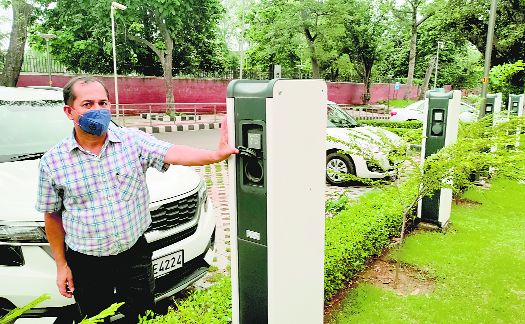 A PGI engineer shows an electric vehicle-charging station in the parking area of Nehru Hospital Extension on Tuesday.

Designed to reduce greenhouse gas emission, the demand for plug-in electric vehicles for personal use is yet to pick up in the city due to lack of charging stations and a high cost of such vehicles.

According to the data available with the Registering and Licensing Authority (RLA), there is no aggressive demand for electric vehicles in the city. In the year 2018, only three electric four-wheelers were registered with the RLA and the figure slightly increased to seven in 2019. With creation of awareness among the masses, the demand for such vehicles jumped five times in 2020 and this year, only 37 cars have been registered in the city so far.

Rising fuel prices notwithstanding, city residents have given thumbs down to electric vehicles.

While the UT Administration has waived road tax on the electric vehicles, these still fail to attract buyers due to a high price. Also, there are expectations of a better technology to be developed in the near future.

The UT Administration has also proposed a policy to give more incentives to city residents to encourage them to buy electric vehicles.

An official of the Transport Department, UT, said the main reasons for the poor sale of pollution-free electric vehicles were the lack of affordable options and infrastructure. He, however, said the demand would surely go up once these two issues were resolved.

In reply to a question raised in the Lok Sabha, Krishan Pal Gurjar, Minister of State for Heavy Industries stated that 48 charging stations had been installed in Chandigarh till July 6 this year, under the Phase-II of the Faster Adoption and Manufacturing of Hybrid and Electric Vehicles (FAME) India Scheme and sale of a total of 48 electric vehicles (e-2W, e-3W and e-4W) were supported with incentive under the scheme in the UT.

The Adviser said they would inaugurate one such electric bus in the city next week. The UT Administration plans to replace its entire fleet of ordinary buses of the Chandigarh Transport Undertaking (CTU) with electric buses. At present, the CTU has 514 buses — 361 run on local or suburban routes and 153 on interstate routes.